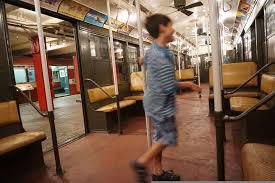 On Sunday night, November 19, at the United Solo 2017 awards ceremony “A” Train won “Best Production” of the festival and it truly deserves this title. It’s an exceptional piece of work written and performed by Anne Torsiglieri that deals with a mother navigating the challenges of raising a son with autism. It’s a sophisticated musical, a gut wrenching memoir and a tour de force solo performance. This production is sure to have a very long life as it’s both theatrically innovative as well as educative.

After giving birth to twins, Anne Torsiglieri discovers that one of the boys is developing at a slower rate than the other and after the gentle prodding by loved ones, goes and has him tested, only to find out that he is on the autism spectrum. And so begins her story…

On an easel on the stage is an evocative artwork of an NYC subway train coming into a station. The ‘stops’ become devices for Torsiglieri to excavate her emotional roadblocks along her fraught journey from total shock to surrender. She plays a range of characters who all weigh in on the situation and their points of view form an intricate tapestry that lets us see the bigger autism picture. Torsiglieri is a consummate performer that commands the stage with her exceptional talents in characterization, accents, singing, lyrics and playwriting. Her multiple skills make for a production that oozes charm while at the same time shaking you to your core.

Brad Carroll has composed a clever, mesmerizing score that blends seamlessly with the text and doesn’t feel like songs but rather an expression of an inner voice. You can’t see where the text ends and the song begins or ends –its quite extraordinary. The music does not stand separately from the story but is interwoven into the syllables, that is beyond satisfying to experience.

Director Risa Brainin has ensured a fast pace to the production that keeps us entranced every step of the way. She has crafted a detailed emotional journey that is totally absorbing. Her use of the performance area is inventive in its simplicity and places the focus squarely on the actress. You can see her strong directorial hand in every moment of this clean, articulate production.

In a festival environment productions have a short time to get into the theater to set up. They have to make choices about lighting and sound that are quick and easy to execute given the time parameters. So with these barriers in mind, it is so wonderful to see a show that manages to still provide a solid lighting design and perfectly executed sound cues. I think they have Michael Klaers to thank for that as he handles lighting, sound, production responsibilities and everything in between to give us a technically brilliant production.

Another wonderful element to the “A” Train is the artworks that have been created by autistic artists. Keri Bowers, co-founder of The Art of Autism (an international non-profit resource for autistic artists, poets, bloggers and other creatives) curated the works used in the show. The magnificent art was created by Fre(e)d in Solo (aka Moontain), David Ideall, Sibtain Ahmed Junejo, Julian Arsi, Christina Paccaerelli, Ronaldo Byrd, Jevin Hosseini, Jalyn Weston, Kimberly Tucker and Jayden Tucker.

I left the show with tears streaming down my face and I felt uplifted by the immense authenticity and love housed in this work. Anne Torsiglieri is a master storyteller and damn good mother!