When the theaters shut down and performers could not perform in public anymore, actor and singer Todd Buonopane took to his bathtub and turned his shower curtain into a theater curtain, performing scenes and singing songs into a camera and sharing the videos on social media. Now that cabaret venues have reopened, performers are returning to the stage. After an out-of-town tryout, Buonopane recently brought his act to the Feinstein’s/54 Below stage, singing songs traditionally performed by women and celebrating some of the greatest ladies of the theater. Having a live (and decidedly enthusiastic) audience to play off of gave Buonopane’s interpretations

One-man performances of Charles Dickens' A Christmas Carol go back to the Victorian era, when Dickens himself gave readings of his instant hit. A new recorded production, starring Jefferson Mays, breathes new life into the tradition, and offers a genuinely moving—and truly theatrical—story about redemption and kindness. This recording was created to benefit partner theaters around the country that were affected by the pandemic. Directed by Michael Arden, adapted by Arden, Mays, and Susan Lyons and conceived by Arden and Dane Laffrey, the filmed version is based on the 2018 production that made its premiere at Los Angeles’ Geffen Playhouse. The script

The constrictions the theater community has faced in the wake of the COVID-19 coronavirus pandemic are unlike anything we have had to face in our lifetime. And while there is no way of knowing when traditional theaters will reopen, technology has offered fans a wealth of options to remain sated: Professionally recorded productions are being released online and live performances are being broadcast from actors’ homes, keeping the artform alive in a different way. Preserved for Posterity The National Theatre has been releasing previously recorded productions on YouTube each week for limited “runs” of several days, encouraging viewers to donate to the

Family gatherings are rarely peaceful, especially when a family is gathering to say goodbye to a dying parent. In Peace for Mary Frances, a new play by new playwright Lily Thorne, the tumult begins as 90-year-old Mary Frances announces that she is ready to die and will no longer take any measures to extend her life. As the family gathers to say goodbye to the matriarch, old rivalries flare up and arguments ensue—and everyone seems to have an agenda behind his or her words and deeds. Lily Thorne’s ambitious script is very detailed in its depiction of hospice care—almost a 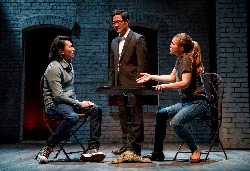 Cardinal Second Stage Snapshot Review: Never Makes Any Real Impression Jena Tesse Fox, Reviewer Cardinal, which opened last week at Second Stage, never seems quite sure of what it is supposed to be: If it’s a black comedy, there aren’t a lot of laughs. If it’s a drama, it’s not a particularly emotional one. The story could be compelling, and it raises some interesting issues, but Greg Pierce’s script is so thin that it never makes any real impression. The story, such as it is, follows a young woman’s return to her upstate New York hometown, where she pitches an idea to the mayor