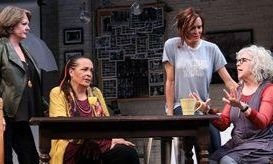 I’ve seen this production three times and it’s still marinating my feel good cells. I find it incredible that a play that tackles the sensitive issues around growing older can leave you feeling so rejuvenated and alive. I think the resounding success of this production is the intensely, authentic ‘friendship’ created by the four central characters combined with a sublime text that feels like a vital conversation.
For 40-years a group of friends have been getting together every year for a group shot. The passing of time is photographed by the dynamic Danny. When she is given a retrospective of her work at MoMA, she decides to exhibit these images of enduring friendship instead of some of her signature photographs. Signing the release forms becomes the catalyst for tensions, truths, revelations and regrets to surface at their last photo session. We meet the opinionated journalist, the headstrong real estate agent and the eccentric veterinarian who all seem to be connected to each other with invisible thread as they move symbiotically around Danny’s spacious loft. So when character’s leave the stage at different points, it feels like a catastrophe, like a snapping –like the balance of nature has been upset. Their ensemble energy is exceptional. There are also two additional characters –Danny’s mother, Bess, and her son Simon who bring in the outside world into this close-knit warren.
Susan Miller has created a text that you’d like to participate in. She expertly captures the way women gather thoughts and weave conversation. You know… the way we start one thought, head off on another tangent, get distracted by a passing perspective, dredge up a strand from the last get-together two months ago and then revert back to the first point? All the while keeping the conversation balls perfectly in the air and finding their culmination points eventually. Nothing linear, nothing expected, nothing you can guess at…just deeply satisfying naturalism. The exact way women wara-wara.
The structure does not feel forced or following a formula –there is no climax, falling action and denouement – only real people talking and navigating the messy bits of their lives. Which means it’s great to watch it over and over again because every viewing let’s you explore a different part of the conversation you are having with them inside your head. I would like the television series now. I want to know if Simon ends up meeting his biological mother. I want to meet each of the women’s partners and ex-husbands in separate episodes. I want to meet Gaby’s children and favorite pet stories. I want to read Mac’s award winning journalism. I want to read Sil’s love letters to a married man. I want to see Danny and Beth before the dementia. I want 40 years of back stories please Susan Miller.
Polly Draper as Danny is a fireball of electricity. She has a wild twinkle in her eye and a playful disposition as she delightfully captures the artistic spirit of the photographer. Ellen Parker as the real estate agent, Sil, commands the stage with attitude and brazen confidence. She brings a feisty, no nonsense woman into the mix. Franchelle Stewart Dorn as the journalist, Mac, oozes intellectual stamina and anchors the group with her powerful presence. The heart of the production is worn on the sleeve of Kathryn Grody as Gabby. The veterinarian creeps under your skin with her generosity of spirit, deeply felt love for friends and animals alike and a quirky neurosis which is utterly charming. These four theatrical giants invigorate every inch of the exquisite loft designed by Beowulf Boritt (you want to move in).
Beth Dixon beautifully portrays Bess, an older woman experiencing dementia. It’s like she is lit from inside -she radiates such love towards her daughter Danny. Dixon is a glorious ray of sunshine that warms the space whenever she makes an appearance. Charles Socarides, as Simon the son, arrives late in the play and manages to make an enduring impression. He is such a confident performer, totally at ease on the stage with a magnetic optimism. All in all, a truly brilliant cast.
This production blossomed under the direction of Emily Mann. She has crafted such tender moments and potently charged subtext that has your solar plexus is in a knot. Mann has brilliantly avoided sentimentality and ensures a pace that resonates as realistic. She has made the complex intertwining of big personalities feel seamless and organic.
Hopefully, I can fit in one more viewing before the show closes on the 28th Jan. I have been moved to tears at every one of the shows because it is such an ode to the pains and pleasures of living.
Running time 85 minutes no intermission
20thCentury Blues plays through January 28, 2017 at The Pershing Square Signature Center –Jewel Box Theater. 480 W 42nd Street
For more information, click HERE