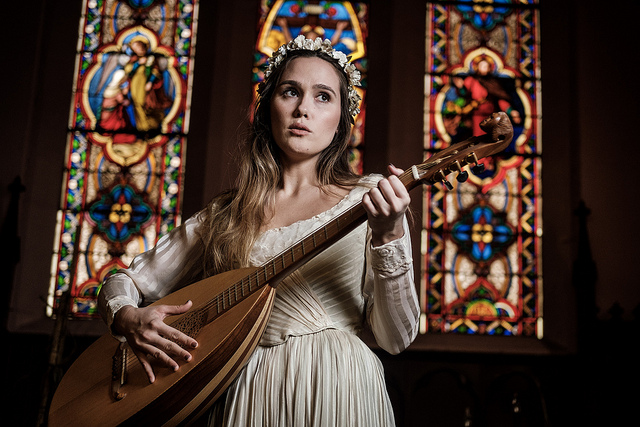 Director Sean Hagerty has crafted a sensational gift for you – a production of William Shakespeare’s “Hamlet” that transports you to a sensorium of theatrical perfection. Part of the success of this work is that it takes place in the Grace Church in Jersey City (one stop on the Path train from Manhattan). The church setting creates a sense of grandeur, ritual and opulence. The sins of the characters seem more overt with God ever present in the stained glass windows and gothic arches. We become the congregation, the priest in the confessional, the court – we are complicit and voyeuristic as the tale is woven around us – the performers in touching distance from our seats. In this circular, saintly space there is no escape from the crimes of murder, infidelity and cruelty. The performers communicate across the vast expanse of the church with their voices ricocheting off the high ceiling beams. We are in the “pews”, we are in the confessional, we are privy to the shame, the undercurrents, the lies…it all feels more shocking when it is taking place in the house of God -like he is listening in. We feel culpable and deeply aware of our own indiscretions and our raw human fragility. It’s completely absorbing.

The brilliant cast fill this iconic backdrop with strong performances, their presence igniting every corner of the hallowed hall. No weak links. Everyone had wrestled with the iambic and came out on top. Sean Hagerty’s prowess with Shakespeare is evident in every moment he has created – we are not alienated by the language but rather engaged by it as the text comes to life with crystal clear meaning, emotion and intention. It’s like Hagerty got hold of the “Babel Fish” from Douglas Adam’s , Hitchhiker’s Guide to the Galaxy and inserted this instant translator into our ears so no meaning was missed. 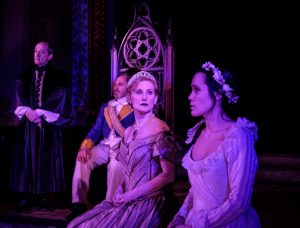 These are 20 reasons you should see this show:

This production is sleek, immersive, chilling, scary, brave…and more eventful than a season finale of Game of Thrones.

The playing schedule for HAMLET is as follows: Thursday, Friday, and Saturday at 7:30pm; and Sunday at 7pm. Performances begin March 28, with official opening on March 31 for a limited run through April 14. Tickets are $25 and can be purchased at shakespeare-at.org