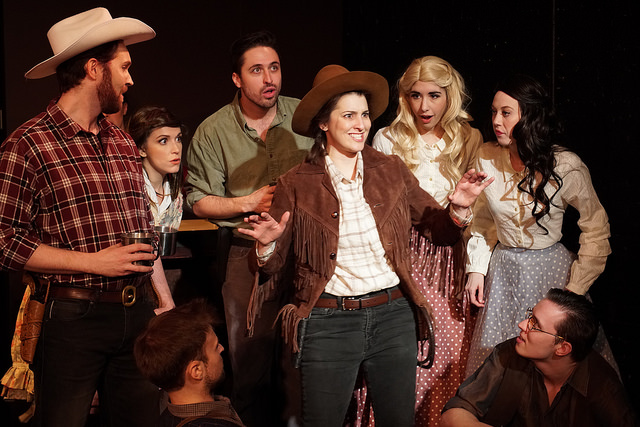 This will serve as both a review and a testimonial. Mel Miller, the artistic director of Musicals Tonight!, has announced that "Calamity Jane," his hundredth production, will be Musicals Tonight!’s last. For two decades he’s produced vest-pocket versions of musicals ranging in original size from intimate to enormous, and ranging in fame from household-word to incredibly obscure. He’s given us operetta ("Mlle. Modiste," "Naughty Marietta"), New York premieres of good West End shows ("Hoi Polloi," "Love from Judy"), Broadway flops that improved on his small stage ("My Favorite Year"), out-of-town casualties by major writers ("That’s the Ticket"), and musicals we

This (almost) all male cast of “The Boys From Syracuse” are more effervescent than a fountain of Moët, more energized than the peloton at the Tour de France and more versatile than a bobby pin. They aren’t just reviving an old 1938 George Abbott, Richard Rodgers and Lorenz Hart classic; they seem to be jump starting a Cadillac Sixty Special. So much gorgeous style wrapped up in a sleek vintage frame. Director and choreographer, Jonathan Cerullo has created an exceptional explosion of craft, timing and talent. His staging is inspired. It’s like watching a Broadway hit contained in a cupboard or