Comedian Colin Quinn has been referred to as a “satirical sage from Brooklyn.” It’s an apt title for the performer who took the stage of the Minetta Lane Theatre to a packed house for his new solo show, Red State Blue State. With his scruffy facial hair — not quite a beard but well past the hour of a 5 o’clock shadow, now with more salt than pepper — the alumni of MTV, Comedy Central and SNL both looks and acts the part of a wise, witty and wistful observer reflecting on our drastically divided nation without malice, blame or pointed fingers, but with a lot of humor and a ton of heart.

The silver stubble was complemented by a plaid flannel shirt and the stage was adorned with a set of simple light bulbs circling the square space (lighting design by Aaron Copp) and a rustic wooden-paneled map of America in earth tones and primary colors that hearkened to Robert Rauschenberg or Jasper Johns’ rugged abstract expressions of Americana. The only prop was a mason jar of water Quinn would occasionally take a swing of to lubricate his vocal cords during the impressive, non-stop 75 minute rapid-fire discourse. The whole setup and show made it feel like he was indeed a satirical stage sitting on the porch of America, not ranting like a bitter old man, but rather pondering who and what we are and how we got here in the first place.

As the title Red State Blue State indicates with Dr. Seuss-style playful simplicity, Quinn’s intention and purpose is to pick apart the separatism that led to this sad state of affairs. Much like the work of Trey Parker and Matt Stone — the creators of South Park — no one is safe, but opposite of many of Quinn’s peers, contemporaries or just about any comedian working today, no one is harshly targeted either. This show is, thankfully, not preaching to the liberal choir (they get plenty of their own dues) and placing the accusations on the conservatives, but it’s equally questioning both sides and asking us all to laugh at not only each other’s follies but our own. Quinn has managed to separate himself from his fellow comedians (especially the political ones, as this is, like it or not, a political piece); he is not an activist like John Stuart or a more cynical satirist like many of the current late-night show hosts, but an observationalist more akin to George Carlin (which is refreshing and delightful in this climate). And though the piece was a long monologue without interruption, the constant punctuation of laughter from the audience gave breath and pause and made the piece feels more like a dialogue — or at least a mutual and even exchange.

He began by bemoaning the issue of a two-party system the founding fathers bequeathed us: “We have two parties. Still. Three hundred and fifty million people. Fifteen genders, four bathrooms, but two parties.” Quinn likened the discontent of the 51 vs 49% having to give in to the others’ rules “like telling a vegan they have to eat steak… but only for four years!” This kind of thinking set the tone of the evening. He lamented that we’ve not even been able to stop barfights when bars should be the “happiest place on earth for adults” and then went on to compare the “free speech’ on social media problem to being like “chatty drunks at a wedding” (Facebook), “cokeheads in the bathroom” (Twitter), Reddit as “the regulars” and the trolls as the “f**k youse!” drunks. Though he had some insight as to the reason why people on social media might gain a Messiah complex — “More than twelve followers and you’re already doing better than Jesus.”

From there he goes into how our governmental system is based on Roman law and we’ve moved from duels to vendettas to vigilantism, only to be replaced by the Constitution — “the biggest middleman of all” that “serves the guilty more than the victim” and that so-called equality, “protects the assholes the same as you” and “is not the same as justice.”

From there Quinn went on to ponder that if Caligula (the cruel and scandalous Roman emperor) encountered Tinder he’d declare: “Damn, I’m into some weird shit but this is just dehumanizing!” then he requested a return to old-fashioned values saying that we’ve been reduced to a modern day Sodom and Gomorrah. How he managed to transition from the Constitution, feudal vendettas and Roman law to sex and relationships without missing a beat and hardly taking a breath was a fascinating leap of thought and concentration.

The way that Quinn could volley between the past and present was delightful, sharp and surprisingly equally relevant to the multi-generational crowd. His wistful musings about a return to a time of innocence where when Johnny Carson would mention a couple on their honeymoon, it would send the ladies into peals of giggles (now, he noted, a couple has had so much sex by their honeymoon, they’d rather go parasailing) or when courtship meant many dates before a peck on the cheek and whole films were devoted to seeking a single kiss, may have at first blush seemed like Dad lecturing about ‘the old days,’ but when given the comparison to today’s relationships being reduced to Tinder and ‘dick pics’, the former seems much more appealing.

Quinn takes a sharp right turn to pause and defend the working-class voters and Christians who put Trump in office because, “For 50 years the left has been saying to Christians, ‘Hey, you superstitious idiots. You gonna vote for us?’” and included a hysterical and spot-on impression of the president dubbing the Bible, “A great beach read, couldn’t put it down, love Bible. Read it at Mar-A-Lago. Joseph and Mary, good people, no place to stay, they couldn’t get in, no room, they kept trying, eventually they got in, it was a tremendous success really.” He predicts the only way the Trump regime will go down is akin to the ending of Scarface. But this is the only real time devoted to the man currently in the Oval Office. Quinn reminds us: “When he leaves, our fundamental differences won’t leave with him. We’re still divided.”

He continues on to makes comparisons of ancient civilizations with modern groups (“Athens was basically a 250 year podcast”) and that the land of the Red States would be defined by Walmart greeters, hunting, Rascal Flatts and gunpowder, while the Blue States would be remembered for Fair Trade coffee, no gates, speakers blasting All Things Considered and arrests for triggering, mansplaining or cultural misappropriation. But the real coup de grace of the evening and most charming, clever bit was when the painted paneled map of the USA twinkled with Christmas lights to indicate all fifty states as Quinn, one by one, had some words of (generally vitriolic) wisdom or remarks for each one. The whole show is worth seeing merely for this brilliant and hysterical lesson in the geography and society of America.

Part of the credit for Quinn’s perfectly-structured — though seemingly pure stream-of-consciousness — flow of thoughts and observations is due to veteran director Bobby Moresco (who has also been a co-writer and producer on notable films such as Crash, Million Dollar Baby, and the upcoming Lamborghini, The Legend, which he also directs). Moresco has bounced around in the business as much as Quinn and directed over 30 plays, finally fulfilling his own bright lights of Broadway dream with Quinn when they collaborated on An Irish Wake.

There is a comfortable, confident and relaxed sensibility that Quinn possesses in Red State Blue State — even when discussing tense topics — that immediately puts the audience at ease, instead of on the defense as some stand-up acts do. This instantly makes the experience feel intimate and personal, more like an enjoyable conversation with your funniest friend over a couple of beers, glasses of wine or mason jars of (insert your favorite libation here) chatting about the state of the nation through chuckles instead of tears and jovial commentary instead of judgements. There’s a lot of heavy-handed political comedy and theatre out there now — understandably so with the fodder provided and sheer shock of our current situation — but Red State Blue State is not that, nor is it a plea or battle cry. It’s an examination of what makes American and Americans interesting and an exploration of what they are and how they might have gotten there, celebrating their differences, flaws, delusions and all. 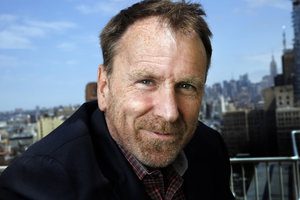 began previews on January 5 and opened on January 22, 2019 for a limited run through March 3rd at the Minetta Lane Theatre located at 18 Minetta Lane (between Bleecker Street and 6th Avenue). For tickets and more information: http://colinquinnshow.com/