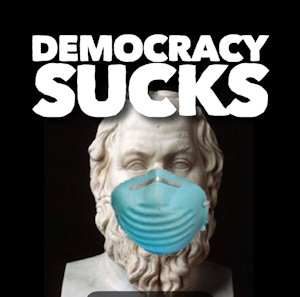 Churchill said, among a great many other things, that democracy is the worst for of government except for all the others. Playwright and doctor of political science Monica Bauer appears largely to agree in her new work “Democracy Sucks.”

The show is a little over half an hour and is a perfect imitation of a remote-learning college class, poli sci 101. Professor B has reached the end of the semester and his wits (but not quite his wine). He has given the same lecture all semester consisting of Plato’s indictment of democracy in “The Republic.” If that sounds a bit dry and tedious, it would be except that Professor B has been imbibing and the two philosophers are sock puppets.

As the lecture progresses, we discover that student evaluations are needed, that Prof. B and the dean are divorced, and things at Upper Michigan State (“Go, Penguins!”) are more interesting than discussions of political theory. In the end, the kids, the professor and the dean all find some practical use to the politics they have studied and taught.

Covid-19 forced the cancellation of most of the fun of 2020, including the Edinburgh Fringe Festival. However, the organizers moved a lot of it to the internet, and so, the Online Free Fringe Fest was born. “Democracy Sucks” is the kind of fun little show that such festivals were made for.

What director John D. Fitzgibbon has done with it shows some genuine creativity forced on him by the virus. A year ago, none of us really knew what Zoom or its competitors were. Now, we even have favorite platforms and custom backgrounds (I use the house from “The Young Ones”). So a streaming performance of a mock college lecture works wonderfully.

Of course, a live, in-person performance is the gold standard. Yet this particular choice is so smart that one might be tempted to the ultimate heresy, “as good as live.”

John Fico’s performance as Prof B is insightful and brilliant. The character would like to grab the world by the lapels and head butt it into something resembling sense, but alas, it doesn’t work that way. He has a job to do, and others will make it as hard as possible to do. And yet, he succeeds. Fico is a smart actor who picks apart the character and his conflicts to put a third dimension to his role.

As we have sheltered in place or quarantined ourselves, we have binge watched just about all we can. “Democracy Sucks” is one of the reasons that it is still worth looking at a screen while we wait for the all-clear signal.

Next Year in Edinburgh?

“Democracy Sucks” can be viewed on YouTube.com at: