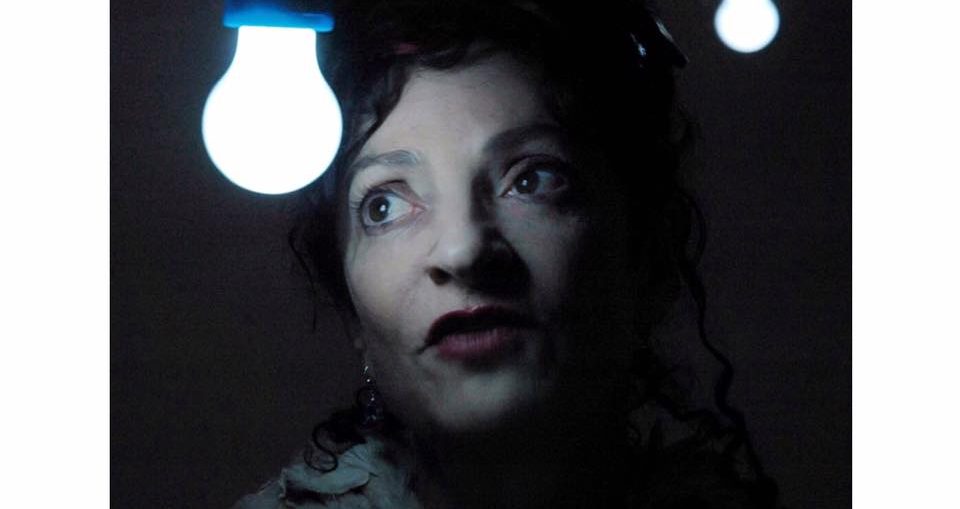 Finding Fellini is a theatrical ode to risk takers, big dreamers and delicious hedonism. It’s a mighty memoir about one woman, Megan Metrikin, who leaves the brutality of Apartheid South Africa in search of her muse –Federico Fellini, in Rome. You slip down the rabbit hole with her and emerge into a wonderland of palpable sensuality, exploration and adventure. It’s a wild, obsessive, funny, filmic experience about the power of art to lift you out of any political or emotional doldrums.

Her fascination with Fellini starts when her father joins the censor board in SA with the sole purpose of being able to see all of the foreign films before they get banned by the restrictive regime, and brings home the maestros’ cannon. There on their living room wall, in 16mm film, a universe of Italian carnivalesque, surreal artistry tickled her imagination. The play deals with her real life journey to Rome and Venice to meet him in the flesh.

In many of Fellini’s films the protagonist is “the fool” and Metrikin adopts the same premise for her play. She is the wide-eyed optimist in hot pursuit of her idol and trips over her innocence in the process. Her longing leads her down the cobbled stones of the Appian way and into the crevices where Fellini might be sandwiched. She stumbles into the fringes of his universe, always a hairs breath from encountering him.

The piece is also a visceral dialogue with her inner artist and his cinematic genius. Snatches of his films mirror her inner turmoil and the different stages of her fantastical mission. She inserts herself into his films creating a brilliant tension between the actress and her unmet expectations. Fellini is omnipresent in the play floating in on his own quotes, in his cinematic mastery and in the indelible marks he leaves on the actress’ flamboyant yearnings to be “seen” by him.

The violent backdrop of South African fear propels her quest to find beauty in the grotesque. It is the anxious underscore of the performance. She personifies the phrase “out of the mud will come the aloe” as she tries to excavate meaning from chaos. The creation of the piece is an ultimate triumph of the artist over fascist thinking. Her creativity has defied censorship. She went searching for her mentor and found her own story.

Megan Metrikin’s writing is lush, layered and extremely funny. She captures the horror of a repressed and angry South Africa in insightful segments that reveal growing up bathed in fear and clothed in nothingness. This stark, desolate environment is beautifully juxtaposed with a Rome oozing with the absurd, the sexual and the intoxicating.

She is a seductive performer, drawing you into her world slowly on dulcet tones and bewitching flame red-headed cheekiness. You are right there at the back of the scooter as she whips around the streets of Roma. You feel her curiosity, her courage and her ache for creative affirmation from her idol. You agonize with her for her unrequited longing for a definitive connection. She is spellbinding. She makes you want to revisit regrets and put on your dancing shoes.

Director and designer, Guy de Lancey, has created a forest of pendulums that light her way. The animations, film fragments and soundtrack he has woven together feel like a dreamscape, the inner workings of an artist’s mind mid-inspiration. He has crafted moments of sweet subtlety and heights of ecstatic abandonment.

Megan Metrikin won Best Actress at the 2017 United Solo Festival for her performance, with director, Guy de Lancey winning for Best Production Design and it’s easy to see why. It’s a surreal experience that gives your senses an exfoliation and sandpapers your imagination.

Finding Fellini is on from February 17- 23, at the Series of One Festival, La Mama’s First Floor Theatre. 74A E 4th Street.

One thought on “Finding Fellini at the Series of One Festival, La Mama”