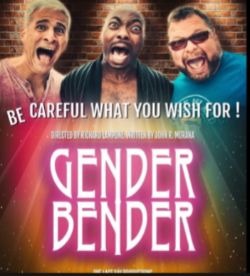 There is currently a great deal of tension among the sexes in these days. The #Metoo movement is an important effort and should not be taken lightly. Though male-female tensions have always existed, the efforts these days to change what is expected of both men, women and the 39 other genders now accepted by Facebook and Tinder isn’t easy. We live in a time of change. Though sexism is still alive and thriving. Movies like Genderbender have the opportunity to bring the sexes together for laughs, even though it only be for 97 minutes. Some of films funniest movies were about about men becoming women, from “Some Like It Hot” in the 1950’s to Tootsie in th 1980’s and now with, Gender Bender.
I first had the opportunity to meet the cast of Gender Bender when I shot a scene at a bar in Oceanside, Long Island last year. I had no idea what I was in for, but I knew some of the cast — including Joey Kola, Christopher Roach, Lamar Chester and Richard Lampone – from doing stand up. It was a great evening of filming, and I had an opportunity to chat with the producers and cast.
This past December, Gender Bender premiered their movie at The Bellmore Theatre in Bellmore, NY on Dec 17th to a capacity crowd and full capacity laughs. Gender Bender didn’t stop there and had a second premiere this past week at Governor’s Comedy Club in Levittown. Hosted by Roger and JP at 102.3 WBAB. I have never watched a premiere of a movie at a comedy club. I’ve watched sketches and maybe some short films but a full length movie? I like the idea and hope to see more of it and even maybe influence some Comedic Film Festivals on Long Island.
The room was filled with comedy fans and alumnis alike. Kevin Downey Jr. who stars in a scene with Gilbert Gottfried as a physicians assistant showed up in all his rockstar glory. I even had the chance to joke with Long Island favorite Joe Starr about movies; his knowledge of the history of comedy is always a blessing. From Scott Baker to Sal Governale, there were dozens of other Long Island mainstays in the house.
Genderbender opens by jumping into the lives of three friends. Richard Lampone who did double duty as the film’s director and as a cop engaged to a beautiful young wife. Lamar K Chester stars as a porn star who is making his next leap into producing more porn films. Thirdly, we meet Joey Kola, a Long Island native and stand-up favorite across the country. He plays a sandwich maker who quits his job in the onset of the film due to some reverse sexual misconduct and discrimination between his female boss and the new hot female employee. The three meet at a bar and have a drunken debauchery riddled night where they meet Christopher Roach, another Long Island favorite and co-star of, “Kevin Can Wait”. Christopher lures them to a Chinese man, The Great Makitaki. Makitaki ends up turning the three of them into women. We later find out Makitaki collects penises in hopes to get his own genitals back.
The movie comes off like softcore porn, without any porn. May I create a term by calling it “softcore comedy,” though very edgy? The three wake up the next morning only to be horrified by losing their penises. They then set on a journey to find the man who set them up to lose their manhood. Joey Kola is a latter day Jerry Lewis as his character. Lamar is hilarious as a porn star who just can’t get over himself. Richard is very convincing and funny as a cop dealing with not being able to have sex with his soon to be wife. All the films main characters are constantly wrestling with sexual misfortunes in one way or another.
What sets great films apart from others are the growth of the main character. We don’t get a lot of character growth. But after speaking with the writer John Morana it’s clear that is because a sequel to the film is in the works. It is arguable that this film has come out at the perfect time. The producers of the night at Governor’s called the month Manuary. Gender Vender somewhat misogynistic look at male and female roles in the workplace and interpersonal connections may b just the thing these days we live in need. Though this film won’t be shown at any #metoo movement events, it would be a great practical joke. Despite that it will still garner laughs wherever it is shown.
Website: www.Genderbenderthemovie.com
Website: www.govs.com
Twitter: @genderbendrfilm
Instagram: @genderbenderthemovie
Run time: 1 hour 37 minutes
© Copyright 2018 by Jeff Myhre, PhD, Editor. No part of this publication may be reproduced without written consent. Produced using Ubuntu Linux.