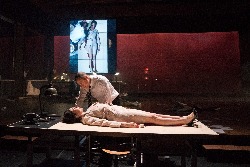 The Fountainhead
Brooklyn Academy of Music
Snapshot Review: Could not be Timelier
Patricia Contino, Reviewer

There is no in-between with Ayn Rand. Her brutal individualism is the closest thing to political theory that the current White House and their followers embrace. The long-term effects of such thinking are frightening, as is the acceptance of reading Rand as a literary rite of passage. In this time of “alternative facts” Rand would have relished, there is one way of dealing with her legacy, Ivo van Hove’s visceral, slow-burning stage adaptation of ‘The Fountainhead’ now at the BAM Howard Gilman Opera House.
Following his own aesthetic, van Hove sets the 1943 novel in an architect’s studio, symbolic of contemporary shared working, living and social media spaces. It is also a successful device the director uses for containing the cast within one set. Koen Tachelet’s script (projections of the English translation are visible throughout the Opera House) is faithful to the 700-page opus. In brief, architect Howard Roark (Ramsey Nasr) will never compromise his aesthetic or personal principles. His pursuit of pure “egoism” destroys rival Peter Keating (Aus Greidanus, Jr.), billionaire newspaper owner Gail Wynand (Hans Kestsing), and one of his own buildings. His soulmate is Dominique Francon (Halina Reijn), a rich bitch whose father gave Roark a commission and writes for Wynand’s “Banner”, a bestselling fake-news tabloid. There is even a one-man Greek chorus, yellow journalist Ellsworth Toohey (Bart Siegers), who would have his own show on Fox News.
By not messing with the primary source, van Rove exposes Rand’s glaringly undefined plot points and idealism presented as fact. Shakespeare, Goethe and Steinbeck knew how ideas embody characters and vice versa. Rand never learned how. Violence, alcoholism and monologues remain rooted in emotion, defeating her argument. A video screen installed by lighting/set designer Jan Versweyeld damningly projects close-ups of characters, building plans (Nasr and Greidanus are excellent drafters), and “Banner” headlines.
The most troubling aspect of The Fountainhead is Dominique, the personification of Rand’s view that women are only happy when domesticated or abused. While Dominique’s expertise is lauded yet vague, descriptions of her body are explicit. Howard and Dominique’s affair begins when he rapes her and, to paraphrase the original text, makes her love him more. Roark tells her he will return her affection when she is no longer “afraid”…of what else is something feminists have been asking for decades. van Hove makes their subsequent love scenes as violent as their first sexual encounter. Her willingness to allow husband #1 Peter to sell her to husband #2 Gail is bad enough, but when Gail imprisons her it becomes a misogynistic Randian fairy tale; van Hove even has Dominque asleep for most of Act II. Reijn did an extraordinary job never justifying her actions or making her likable.
Therefore, the final question remains why sit through “The Fountainhead”? The first is that the 2014 production could not be timelier. The President possesses personality traits held by all the male characters: verboseness without substance, hatred of those not like himself, issues with truth telling, egotism of the strongest degree. van Hove made them part of the stage collective, and all of the actors were clear in expressing each of their character’s’ inadequacies.
The other is to experience the production. The four-hour commitment is worth taking. Ivo van Hove is masterful at depicting the accepted and tearing it apart until it looks new. Opinions may not change because Ayn Rand is so polarizing, but it’s better to know what she stood for than pretend.
Running time: 4 hours and 15 minutes with one 20-minute intermission
Advisory: Nudity and violence
The Fountainhead is at BAM’s Howard Gilman Opera House (30 Lafayette Ave; Brooklyn, NY) through December 2, 2017. All performances start at 7 PM. For tickets and information on the production, please click here. BAM’s upcoming schedule is on their website. Toneelgroep Amsterdam’s website is accessible in English.