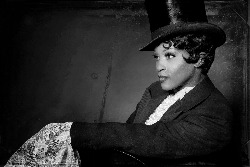 Before Beyonce and Rihanna, before Miss Ross and the Supremes, before the glorious Lena Horne and the great Dorothy Dandridge, there was Josephine Baker. They all stand on her shoulders. She was the first African-American superstar, but because of America’s shameful history of race, Baker became who she was in her adopted home of Paris. By my count, her story has been filmed or staged at least four times. There is something about her story that is wonderful, tragic, upsetting and delightful.
Tymisha Harris has a one-woman version of the tale that is probably the closest to an evening with Josephine Baker as one will ever experience. It won the Best Show and the Outstanding Solo Performance awards in 2016 at the San Diego Fringe Festival, it picked up five awards at the IndyFringe festival the same year, and was cited as a “breakout” hit at the Winnipeg festival. It is now in New York as part of the SoHo Playhouse Fringe Encore series, and I expect greater successes lie ahead.
What makes this telling of the story so powerful is that Harris can act, sing and dance. Because she is a world-class triple-threat, Harris brings Baker back for us. There are no supporting roles, and the demands made on Harris are huge. Her talent and commitment are more than up to the job. She is rivetting.
The show begins with Baker singing “J’ai deux amors,” followed quickly by the line, “I was born and christened Frieda J. MacDonald, a nearly hopeless name. But still, it had that tiny ‘J’ – that little Josephine buried inside of it. And there was a little French girl named Josephine buried inside of me, just dying to break out.”
As Baker, Harris takes us quickly from the Jim Crow South of her upbringing, briefly to New York for her time in Shuffle Along, an all-black (negro in those days) musical on Broadway. In that production, a Frenchman discovers her and whisks her off to Paris to star in his new show. The price, dancing nude. “Oh, I wasn’t really naked on stage,” Baker says, “I simply didn’t have any clothes on.” Paris loved her and the rest is history.
That history includes five husbands, 12 adopted children, a failed visit to America in the 1930s, a liaison with Mexican artist Frida Kahlo, a much more successful US visit in 1950 (which still ended in her being called a communist by the fascist apologist Walter Winchell), and a few years working as a spy for the French resistance during the Nazi occupation of France – as Harris says, “Don’t Laugh. Look it up.”
Through all of this, Harris is almost perfectly in the moment every moment. Carelessly joyful in inter-war Paris, a terrified young woman in Missouri, a teasing exhibitionist (mercifully another member of the audience was her impromptu first husband for a costume change), and all throughout, quite simply a woman in need of love and addicted to attention.
Standing on Baker’s shoulders carries with it a responsibility Harris clearly understands and accepts with enthusiasm. I suspect Baker would be pleased with her portrayal and very proud of the younger performer – although mild jealousy wouldn’t surprise me either.
Run time: 80 minutes without intermission
Josephine: A Burlesque Cabaret Dream Play runs through February 18, 2018, at the SoHo Playhouse, 15 Vandam Street, New York City. For more information and tickets. Visit the theater’s website.