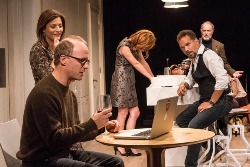 The Barrow Group Theatre Company and The Pond Theatre Company present Torben Betts darkly comic, “Muswell Hill”. It’s social realism that pokes and prods at our first world ‘problems’ with a sharp Stanley knife blade. It is utterly absorbing and knocks you off your axis for a bit. You’re also laughing out loud as the dialogue bounces you around like a 4X4 ramping a sand dune, leaving your stomach queasy from the sudden jolts. It’s a high octane theatrical adrenaline sport and you’re quickly addicted.

It’s 2010 and we’re in the kitchen of married couple, Mat and Jess, in the North London suburb of Muswell Hill. Monkfish Stew is cooking on the stove and guests are expected to arrive at any minute. There is a palpable tension as the two move in tandem but in isolation. Against this domestic blistered situation, we hear the news of the earthquake in Haiti that has killed a hundred thousand people. Throughout the play different characters will reference the horror but the news quickly evaporates like the endless bottles of wine on the sideboard.

Karen is first to arrive bringing verbal diarrhea, new dietary requirements and an obsession with her dead husband, Julian. Simon, an old college friend of Mat’s, saunters in after a 15-year absence with stubborn, opinionated rhetoric that alienates him from connecting with anyone. His loneliness pervades the kitchen like a bad smell. Later Jess’ younger sister, Annie, will explode into the house with unhinged, manic self absorption accompanied by Tony a lecherous theater director. The start of the party introduces us to each of the characters and their current preoccupations but by the end of the evening the flimsy fabric of their carefully constructed worlds is threadbare.

I did not know the work of Torben Betts before this production and now I am obsessed with devouring his cannon. He is a master of crafting dialogue that is a dance of words that ricochets off the stark middle class kitchen walls and gets lodged in our intestines. You feel completely uncomfortable as you try to digest what you are experiencing. I loved every phrase, full stop and pregnant pause. The script is a total gift for the cast and director providing a perfect performance playground. It has more layers than a Japanese Mille Crêpe from Lady M’s and just as delicious.

Edward T. Morris’ striking yet ergonomic design gives us a full functioning kitchen that is the ‘heart’ of the apartment. Guests are drawn to the space as it seems to be the place where the characters seek to be nourished on a soul level. It’s also the space of compulsive consuming –wine, food, Facebook and each others unravelling narratives.

The cast are phenomenal. Six consummate actors playing dialogue dodgems and barely avoiding the crash. Colleen Clinton, as Jess, is riveting as the stoic accountant executing the dinner party ‘to do’ list in a series of silent, methodical actions. You see her in total command of the space but her eyes belie her anguish. Clinton has a commanding presence and is the anchor grounding the production. Jason Alan Carvell brilliantly portrays Mat, the ex-model turned writer, as a charming parasite more interested in affirmation than engagement. Carvell gives us a constantly distracted husband seeking affirmation but is also on the verge of exploding as he wrangles with information that can potentially capsize his safe existence. He gives us a man that appears in control but is nurturing a Vesuvius cataclysm inside.

Lily Dorment, as Karen, is hilarious. She is a comic genius giving us a range of quirky reactions that speak volumes about the inner workings of Karen’s neurotic mind. Her characterization of the widow unable to find a still point was magnificent. Dorment has such ease on the stage and is beyond magnetic as a performer. Richard Hollis was so exceptionally insufferable as Simon you wanted to spank him. Probably my most favorite character in the play. Hollis ensures that Simon really gets under your skin while at the same time offering some of the funniest comic moments of the play. Hollis is a master of the dead pan and a total delight to watch.

John Pirkis, as the irritating thespian Tony, gives us a well observed character that is so detailed in it’s execution you want to start cheering in every scene he enters. Pirkis’ physicalization of Tony is extraordinary and painfully creepy as he darts about the stage invading peoples’ body space whilst regaling everyone with his ‘knowledge’. It’s such a pleasure and an honor to watch such a skilled performer at work. Sarah Street as Annie is effervescent as the captivating, self destructing millennial with a daddy complex. She hurtles around the kitchen charging up the atmosphere with her irrepressible vitality and makes you feel like you have gotten caught up in skirt of a whirling dervish. I particularly loved her ‘Cleopatra” audition piece that was very, very funny.

The greatest kudos must be reserved for director Shannon Patterson. She has orchestrated a theatrical opus of staging, comic timing and characterization. You can feel an intelligent hand in every exquisite beat, moment and tension drenched scene.

Kristen Isola’s costume design is spot on and we see the characters clearly wearing their ‘selves’ on their sleeves. Solomon Weisbard’s lighting design keeps us alert and wide eyed in the brightly lit kitchen. Matt Otto provides a realistic sound design (particularly loved the email notifications) and Addison Heeren must have his hands full as props master as the staging requires extensive use of practical and personal props.

Definitely one of my most favorite productions I have seen this year. I have been evangelical in my praise of this production to anyone who will listen and I urge you to join this dinner party in Muswell Hill. It has a limited run so don’t wake up late and miss this gem.

Copyright 2017 by Jeff Myhre, PhD, Editor. No part of this publication may be reproduced without written consent. Produced using Ubuntu Linux.