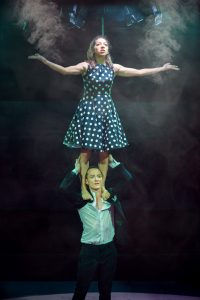 NUMBNESS: CHAPTER 2, breach birthed into being by One-Eighth Theater is a quick firing collage of absurdist clues to find your way through the maze of each moment. Reality, rules, linear, logic are to be left at the door. You’re invited into the circle to witness the circusy atmosphere of new ways of thinking, from behind the comfort of the plastic splash sheets provided. It’s eccentric neccessary nonsense. Can you joyfully jump into the contagious insanity or will you stay comfortably numb?

Black Water by Sylvia Bofill and Yovo by Robert Lyons are the text trampolines that set the cast bodies to hyper speed. The performers wrap their skin, teeth, sinews and souls around the words like pigs in a blanket. They ricochet off each other and every possible surface of the space to break boundaries, testing all limits. Are they trapped in a fallout lab after the sun gets blocked out? Are they the only ones left? Who made up the rules? Who are the powers that be that shape the routine and ritual of their daily hell? Can Fred and Ginger keep doing the steps required to keep the whole thing afloat? Is it end of times or just a heightened version of domesticity in the 21st Century? Is one partner always keeping an eye open for escape? Can you smell encroaching freedom? In the midst of the daily dance an intermission of sorts, a looking in – one man has a physical response to the world around him. A feverish dream of privilege and poverty in a sand pit of post everything. Or whatever occurs to you as you sit entranced with the marvelous discombobulation.

Jungah Han’s Set Design is a romantic letter to the New Ohio Theatre space – every inch of it is adored, given focus, opened up and loved. You are in a kind of Epcot centre of 360 degree delight. Erik Petersen’s lighting design is then the perfume -lingering behind like a sensory invitation, tickling the imagination with slow reveals. The Sound Design by Elia Chuaqui is a choir of genres resonating forgotten apertures that comes at one from every conceivable angle through space, time and nostalgia. Meghan E. Healey clothes and disrobes the cast with ingenious style, color and character. The preposterous props arrive thanks to Chris Cancel Pomales eye for the absolutely absurd. Jan Lech conspired to compose music to live by.

Loved it. “It would have been nice to have had unicorns”(Tom Stoppard). It incites the delicious idea of, “what rules will you break today”?

This is an Archive Residency Production in collaboration with IRT Theater. Part two of a trilogy. Chapter 1 was born in Turkey and Cyprus where the theme explored was Empathy in the peice Mouthgasm. Chapter 2 explores the theme of Numbness and it came about after witnessing firsthand the attempted Coup d’etat in Ankara, Turkey.