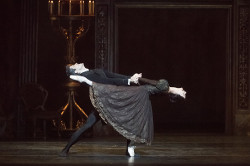 One of the first visitors to the “New Met” was The Stuttgart Ballet. Their Artistic Director John Cranko brought a substantial repertory of his own work and Marcia Hayde, one of the great ballerinas of the late twentieth century. (There are clips of her on YouTube and she is part of “The Turning Point\’s” priceless gala performance). In 1973, Cranko suffered a fatal heart attack on the company\’s flight home following their Met engagement. It is appropriate that American Ballet Theatre revived Cranko\’s “Onegin” during the 50 th anniversary of the Metropolitan Opera House at Lincoln Center. The sold-out June 20, 2017 performance featured Roberto Bolle in the title role and Alessandra Ferri as Tatiana.

Cranko s other device are the traditional duets and solos requiring as much acting as dancing ability. Onegin and Tatiana s first duet takes place after they meet where she falls hard for the tall, handsome guest. However, she cannot keep up with his fast, complicated steps, which irritates him. Their next encounter is durThe Letter Scene,” when Tatiana declares her love for him. (ABT thoughtfully included a translation of the letter in the program.) What begins as a solo turns into a fantasy pas de deux with a passionate Onegin stepping through her mirror. In the final scene, Cranko makes his sole concession to Tchaikovsky with a long, incredibly danced sequence with Tatiana rejecting Onegin. Now Onegin cannot match her determination or passion. He never could.

“Onegin” can only work with believable dancers in the leading roles. Roberto Bolle was perfect as the indifferent snob interested in nothing but his own amusement. The role called for one of the best ballerina partners to be inattentive and cruel. By abruptly leaving the stage (walking, not jumping, and making it much more effective), he missed the best moment of the performance: Alessandra Ferri\’s wishful, heartbreaking expression watching him go. The former ABT Principal now Guest Artist didn\’t have to look like a teenager to be or dance like one. During the worst ballet birthday party of all time (at least Princess Aurora wakes up an act later), her Tatiana did everything to get Onegin\’s attention, from jumping and pirouetting to get his attention, to wearing an expression on her face relatable to every audience member who has experienced rejection. The substantial height difference between Ferri and Bolle made her vulnerable but never fragile. Ferri remains a wonder who dances with her whole being.

Alessanddra Ferri brought Roberto Bolle to ABT in 2009. Though both are active outside of ABT – if it were all possible, it would be amazing to see them in either Ashton\’s “Marguerite and Armand” or Tudor\’s “The Lilac Garden.” ABT has a roster of Principles and Soloists who can add their own passion to these works, along with a corps du ballet that are master storytellers.

Â© Copyright 2017 by Jeff Myhre, PhD, Editor. No part of this publication may be reproduced without written consent. Produced using Ubuntu Linux.