James Rutherford’s new translation of Oscar Wilde’s 19th Century play gives us a palatable Salome for 2018 audiences. It interrogates the nature of desire and the fallout that ensues from the repression of self-expression. This production has an intense muscularity that makes you feel like you’re a spectator at a gladiatorial fight between the unrequited and the objects of their sexual obsession. It sparks a sense of urgency as you get caught up in the various devices that instigate the unravelling and revelation of the characters true nature.

We’ve all heard the story. Herod asks his step daughter to dance for him and in exchange she can have anything her heart desires. She does the dance of the seven veils and supposedly, at the urging of her mother Herodias, asks for the prophet Iokanaan’s head on a platter. Herod does not want to kill the prophet as he fears, and is fascinated, by him. Eventually he honors his word and the prophet is beheaded. Shortly afterwards he sentences Salome to death as well.

Traditionally played, Salome has the same effect on me as watching Shakespeare’s “Taming of the Shrew” – the tone deaf misogynistic, patriarchal colonization of the female body and feminine archetypes roars above the narrative. In the “Shrew” the wild “essential” nature of Kate must be quelled, the fire put out in order to be a perfect wife. In Salome you feel the male voice telling the females story. She comes across as a wretched, depraved thing, a manipulator, black widow – replete with vagina dentata who is hell-bent on sating her insatiable lust by destroying men. Is she a spoilt dilettante, a seductress, a mad woman, a femme fatale tempting men to sin? But the key question for me is always, “why is she being asked to “dance” for her stepdad? What’s that about? Fortunately, Rutherford changes the conversation.

The blurb of his production points to a directorial vision that embodies “queerness” as the central aspect of his concept. It is the ideal choice for this play. Oscar Wilde wrote Salome in 1893. The production, featuring the serpentine physicality of Sarah Bernhardt, was censored in England and by the time it opened in Paris in 1896 Oscar Wilde was incarcerated in Reading jail for the “crime” of homosexuality.

In Rutherford’s Salome, our Iokanaan is transgender – a mesmerizing unknown. Intrinsically magnetic and yet feared – “they” becomes the canvas for others distorted projections. Iokanaan holds tremendous power, yet is hidden from view, revered and feared in equal measure and is a harbinger of death for those that deny their inherent desires. The character of Iokanaan in the ‘cave’, the biblical ‘closet’, brings prophesies of the future and perhaps Wilde subconsciously resonated with this figure. Perhaps he was foreseeing his own “beheading” for being his true self?

In this production we get caught up in the dance of life, we’re twirling around the circumference like figures in a Matisse artwork –unable to stop the acceleration. The ritual, the blood letting, the sacrifice has begun. We’re watching the player in the middle. We train the magnifying glass onto the moment and watch how the “ants” burst into flames under the glare of exposing light. It’s bewitching.

Rutherford’s directorial vision explores our “gaze patterns”. He draws our attention to the unbidden desire in every moment with clever devices like a swinging lamp manhandled to spotlight the specific action. Scenes seem to fade into view from dark corners of the space. He works with the mystery of shadow play with Iokanaan silhouetted behind a swath of white fabric echoing the faint outline of Christ’s shroud of Turin. Ominous projections catch the tail end of the “veil” and hidden camera’s give us unique “point-of-view” perspectives. We are asked to constantly monitor our gaze patterns. Where are we looking? Why are we looking? Who is catching our eye?

We are invited to watch with Herod’s lustful eyes. Our gaze is directed to the moon, the stars and the cave below –the inner world, the prison. It’s completely enticing as your view keeps shifting –literally. We are given different perspectives of the action by changing the focus of who is seeing and who is being seen. Like a latecomer to a parade, we move through the throng hoping to get a better line of sight and are rewarded with slithers of story, like watching infidelities through a keyhole.

The 22 strong cast are exceptional. Their focus is clear, directing us to the heartbeat of every scene. Everyone is telling the same story. No-one pulls attention away from the plot and they raise the stakes through their commitment to every moment. It was deeply satisfying to watch such a tight ensemble. (Including Patrick Cann, Catherine Gasta, Julia Gu, Brough Hansen, Jonathan Harris, Jamie Lowenstein, Stephanie Orta-Vazquez, Rava Raab,Justin Reinsilber, Anthony Simone, David Rudi Utter)

Brough Hansen and Ross Cowan, as the two soldiers, were fantastic anchors serving as both commentators and drivers of the action. I liked their comedic “Chaplin-esque” clowning as well as their ability to display the empathy of the witness who is paralyzed to stop the crash about to happen in front of them. Lizzie King-Hall, Louis Pearlman, Jon Froehlich and Charise Greene were feisty and hilarious as the bickering Jews debating the finer points of their religion. It was brilliantly orchestrated comic choreography (Jess Goldschmidt) and a small oasis of playfulness in the darker desert of the greater tragedy. 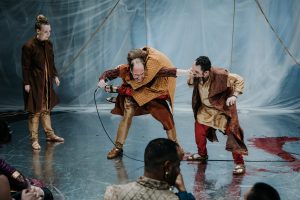 Jing Xu, as the page of Herodias, who is enamored with the young Syrian (Alexander Reed), who in turn is pining for the princess Salome both personified the fragility of unspoken desire. They expertly portrayed longing with divine agony.

Lisa Tharps as Herodias is like a blood red, dragon hibiscus flower –bold, seductive, impressive and striking. Her powerful physical and vocal presence dominate the space as she commands the group as the formidable matriarch.

Marty Keiser is the fool tetrarch – a magpie easily distracted by the baubles strewn across his royal path. He wants it all. Keiser is magnificent as the king. He swirls the text around his mouth like an aromatic, smooth red wine. He excelled at running the gamut of emotions from hostile husband to lecherous step dad, to lovable entertainer, to vicious punisher. Keiser’s Herod is like an electric wire struck down in a storm, whipping around a waterlogged street looking to ignite a fire. He was always on the verge of spontaneous combustion from too much greed, lust and unchecked power. I loved every single second of his awesome performance.

Feathers Wise gives us a statuesque, soulful Iokanaan who seems to be speaking directly to one’s solar plexus. Her Iokanaan is deliciously hypnotic as “they” gently rock you into submission. Wise gives us a Iokanaan who is resolutely self aware and who invites awe and terror in those who fall under their gaze. It’s a haunting performance from the first words uttered and sung through the first veil, the subconscious, the hidden part and later emerging as the radiant light exuding attractive “otherness”. Wise is a sensational performer capable of truly holding your attention. You never want to look away. Wise’s Iokanaan is the epicenter of the fever inflaming the players.

Laura Butler Rivera as Salome is able to turn you into stone with a pointed stare or melt you into caramel with a wink. She is able to transform a one dimensional biblical footnote into a complex women straining against the borders of conformity. She gives an electric performance as the terrified teenager warding off lascivious advances of her step father, as the petulant princess strutting her sexuality to get her way, as the enraged Medusa unleashed, and the volatile, raw, passionate woman hungry for the touch of the forbidden.

We know the dance of the seven veils is coming up. We can see that Butler Rivera already moves like quicksilver around the circular stage and you have high expectations. Between Jess Goldschmidts choreography, Wladimiro A. Woyno R’s epic projections and Rivera’s rabid, violent and vulnerable unveiling –we slip through the fissures she creates in the room and find ourselves in another reality. She has danced herself ferociously into self-actualization. It’s spectacular, spectacular! She is a breathtaking performer with an astronomical skill set.

The production team of Lara de Bruijn (costumes), Kate McGee (lighting), Oona Curley (scenery) and Michael Costagliola (sound & music) have created a thrilling atmosphere of burning desire and ritualistic other worldliness in this highly symbolic, absorbing riff on queerness. It’s a massive production by M-34 and FringeNYC in association with the Irondale Center, that is like an irresistible fly fishing lure drawing you onto a hook.

(My only critique, is an ongoing pet hate of mine – having performers on stage before the play “begins”. It is almost the norm at every off and off-off Broadway show I see these days. I yearn for the magic of entering another universe as the lights go down. I start to feel sorry for the performers having to sit there for 20-minutes as the audience chat loudly to friends and play on their cellphones. We’re half in the world and half out of it. The in between state weakens the power of that first moment of being transported to this other place. Pre-show “performances” where characters are hanging about adds absolutely nothing to the production)

Running time: 95 minutes with no intermission.