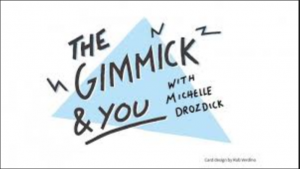 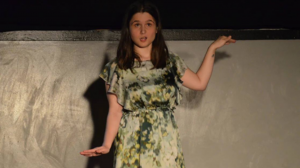 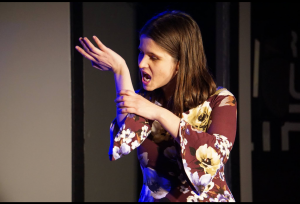 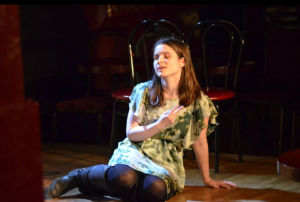 I’ve spent many of my 41 years on Earth on the fringe of the entertainment world, vicariously living life through the success of others by attending their shows and creative efforts. I’ve acquainted myself with a great many talents. This was true again on this very singular occasion, a Solo Improv production starring Queens native, Michelle Drozdick. I have been visiting The Pit as a performer and audience member for many years. Meeting friends and connecting at every turn. During my time there The Pit has solidified it’s positioning in comedy history and has been a setting for tens of thousands of creative minds to thrive. The Pit is essentially a comedy factory, churning out show after show giving students, teachers and audience members a medium to watch and put forth their work on a never ending consistent basis. This consistency was once again true on Monday September 21st at 7pm when Michelle Drozdick presented her Solo Improv show “The Gimmick & You”.  When asked where she derived the heading, “The Gimmick & You”, Michelle responded with, “Ah! It originally came from the fact that I’d pull a gimmick from a hat after the interview. That gave me a format. Like a ‘coming of age story’ or ‘you must be animal’ all suggested by friends an acquaintances through an online form.” Michelle added slyly, “I moved away from that because it was a little too, “gimmicky”.”

A Solo Improv show is no easy undertaking. You literally only have yourself and the audiences riposte to rely on. Being physical is so important in this type of theatrical endeavor. Which made for great fodder as Michelle became a cat. She completely physically became one of the cats she and Heather Jewels-Booth had spoken about only moments earlier. Very few talents can achieve a show of this nature. Michelle Drozdick does so with ease. I knew when I first met Michelle two years ago I was meeting a serious talent and someone who may even change the face of comedy, which is in need of a makeover.

The Gimmick & You has been running for over a year now at The Pit Underground located at 123 E 24th St, New York, NY 10010. Michelle’s show consists of a featured stand up comedian and a short interview with a local personality. Tonight we dined on Dustin D’Addato. Dustin’s noteworthy brand of comedy delved into his salacious need for orgies. Dustin opened the show and kept the packed to the gills audience going dishing out a barrels of laughs. Said barrels had to be washed after Dustin finished his set for the 8 pm show. Next Michelle did a quick interview with Heather Jewels-Booth whose name alone congers thoughts and dreams of stardom, class and sophistication. Michelle and Heather mostly talked cats and fashion. Heather’s dress of autumn leaves fit perfectly for our first full day of fall. Michelle then takes the evenings interview with Heather and makes a show out of it, and she did so with stalwart fervor. If you want a quick taste of some great comedy go see “The Gimmick & You” your next chance will be at The Pit: UndergroundOctober 22nd at 7pm,

For information on shows at The Pit – https://www.the-pitnyc.com

Connect with The Gimmick & You https://www.facebook.com/TheGimmickAndYou/