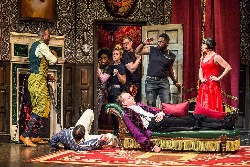 At some stag in your theatre career (and that includes just being in the audience), you have a performance that isn\\’t exactly good. An actor forgets lines, or props are not where they are supposed to be, or a sound cue doesn\\’t come, or part of the set wobbles or falls. On a particularly bad night, more than one of these things crops up. When they all happen at the same time, you get “The Play That Goes Wrong.” This import from London\\’s West End is currently the longest-running comedy on Broadway, and I can only hope its silliness and exceptional execution keep it running for a long time to come.

The premise is simple – we have come to see “The Murder at Haversham Manor” presented by the Cornley University Drama Society. Before the audience members have settled down and turned off their cell phones, Lighting and Sound Operator Trevor Watson (Akron Watson, who is almost plausible as a Duran Duran fan – hey, no one is that good an actor) and Stage Manager Annie Twilloil (Ashley Bryant) are cruising the orchestra looking for a dog who will play a role in the second act – at intermission, they continue because, of course, the dog is gone. One of the audience members is summoned on stage by Annie to help duct tape a mantle piece in place.

After the official curtain time is past, President of the Society, Chris Bean (Mark Evans in a brilliant Broadway debut) apologizes for the ticketing mix up, but he is certain that all 617 members of the audience will enjoy the performance as much as they would have “Hamilton.” Once the play within a play starts, things go ever more askew. Paint thinner replaces the bottles of Scotch, the corpse (Jonathan Fielding) keeps getting up to exit the scene, and eventually the second level of the set collapses. I counted three different cast members being knocked unconscious, and the fire represented no threat to the well-being of all present.

The whole premise of the production is a Thespian Murphy\\’s Law – if anything can go wrong, it will. And does. My fear was that the whole thing would amount to a one-trick pony, and that tedium would set in around the 15-minute mark. It does nothing of the kind. Just when you accept that Annie has a fanatical fear of being on stage, she is force to take on a role because Sandra (Amelia McClain) has been knocked out. When Annie discovers the joys of being an actress, and when Sandra comes around, the two engage in fisticuffs to continue playing the part. Their slapstick is Three Stooges funny.

My personal favorite, however, was Alex Mandell\\’s performance in the role of Max Bennett. There is a Max in almost every amateur production, the guy who can\\’t help but react to the applause. He discovers a bit that wins some laughter, gets this goofy “what-a-clever-fellow-I-am” look on his face and repeats the action with great gusto again and again. Mandell\\’s professionalism in portraying a rank amateur is simply flawless.

Running him a close second, if not producing a dead heat, is the butler Perkins (Dennis Tyde) who is unfamiliar with certain words in his share of the dialogue. So, he has written them on his hands, but not phonetically. Thus, cyanide is pronounced “ky-an-needy,” only to be properly pronounced by another character in the very next line. As the production goes on, Perkins becomes more and more embarrassed. It\\’s the kind of funny that made my face ache from laughing.