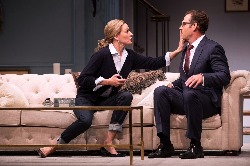 Imagine being a fly on a wall of a tony Capitol Hill townhouse, one where confidences are shared, deals are made, and betrayals are everyday bargaining chips. Such is the environment in Beau Willimon’s shallow but satisfying The Parisian Woman, enjoying a savory production at the newly reopened, equally tony Hudson Theatre. Willimon, the force behind House of Cards and author of a previous and superior inside-Washington play, Farragut North, hasn’t much on his mind but illustrating the horse-trading and flexible alliances behind political appointments, but he does illustrate them very entertainingly. And The Parisian Woman, which is based on a 19th century French farce, and which Willimon has been updating since its California premiere in 2013, couldn’t be more current.

That townhouse, one of Derek McLane’s elegant sets (he cleverly covers scene changes with illuminated, fragmented news crawls), houses Chloe (Uma Thurman) and Tom (Josh Lucas), a Washington power couple of no particular import. She’s a somewhat idle rich lady, and he, a tax lawyer for gentlemen of privilege, has been tapped as a candidate for a circuit judgeship—a plot point that feels unlikely, though no more so than Ben Carson. These two attractive, well-spoken players enjoy an open marriage, into which she’s currently invited Peter (Marton Csokas), a multimillionaire banker with the president’s ear, not to mention the chief of staff’s. If Chloe can use him to further Tom’s chances at the judgeship, she will. And if that backfires, which it does, there are other people she can use—most notably Jeanette (Blair Brown), a good friend despite their political differences who’s been nominated for Fed chairwoman, and Jeanette’s daughter Rebecca (Phillipa Soo), the only Democrat onstage besides Chloe, a beautiful young superachiever who’s contemplating a run for state assembly.

They’re all shrewd strategists with good working knowledges of how political things get done nowadays, and they lie, manipulate, and blackmail one another with the ease of the seasoned practitioners they are. The plot trips along a little too easily, clichés pop up—“You have your whole life ahead of you,” Chloe counsels Rebecca, for example—and Pam McKinnon’s direction might be called more professional than inspired. But the 90 minutes just fly by, and the cast is aces. Chloe isn’t much of a stretch for Uma Thurman, who merely has to be poised, alluring, and calculating, qualities she’s assumed many times before. But she’s certainly a vision in Jane Greenwood’s flattering costumes, and she’s never not fun to watch. Blair Brown’s authority and way with a comic line (“Men. Their nose gets jealous if they’re breathing out of their mouth”) are undimmed, and Phillipa Soo, fresh off of Hamilton and Amelie, shares her character’s authority, resolve, and wisdom beyond her years. The men have rather less to do, but Lucas helps us understand the complicated moving parts of Tom’s and Chloe’s marriage, and Csokas convinces us that Peter could be very, very smart in business dealings and very, very stupid in personal ones.

There’s minimal talk of Russia, the Mideast, tax reform, or sexual harassment, but names are named—Mattis, Kelly, Hillary—and Willimon’s abundant cynicism, with characters saying things to each other like “Public opinion doesn’t matter anymore,” feels as real as it is discouraging. Anti-Trump lines, with this New York audience, get big laughs and applause; if you’ve felt lost and helpless since last January, you’ll feel relieved to be among so many like-minded compatriots. The Parisian Woman feels similar in character and political observation to Anthony Giardina’s The City of Conversation from a few seasons back, another journey through Washington’s elite drawing rooms, where quick-witted people indulge in complex power games and negotiate with hidden aces up their sleeves. This one’s more glib, and less deep. But you won’t be bored for a minute.

The Parisian Woman plays through March 15 at the Hudson Theatre.