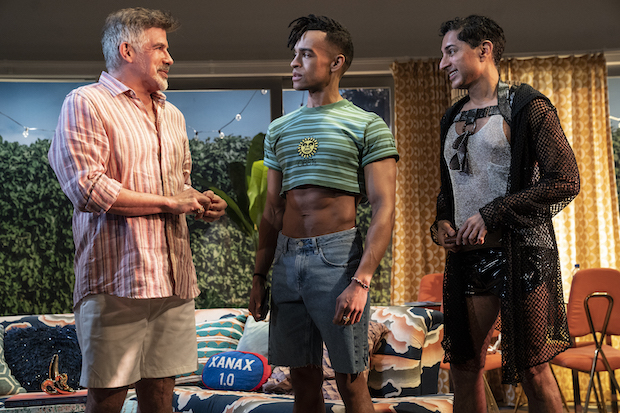 In mid-2020 with the theaters closed and the pandemic raging, Second State Theater;s President and Artistic Director Carole Rothman checked in with playwright JC Lee to see how he was doing and if he was writing. He told her about a play he was considering, about a group of gay male friends gathering when the pandemic had subsided.

“He was pretty sure he wanted to write something that would be healing and laughter would be a means to that end,” she writes in the Playbill. The result is “To My Girls.” Despite getting a little lost trying to find the ending, it is a decently-crafted play that delves into the characters’ friendships, personal issues and their experiences.

The three main characters have been friends for ages, and as the pandemic cools, they have arranged to meet. Curtis (Jay Armstrong Johnson), Castor (Maulik Pancholy) and Lee (Britton Smith) get together for a weekend at an Airbnb in Palm Springs, owned by Bernie (Bryan Batt), a gay baby-boomer. As the alcohol and sunshine take effect, we uncover more and more about their lives through their gossip and banter. That evening, Castor brings home another character, a twenty-something Adonis named Omar (Noah J. Ricketts). Castor passes out before anything occurs, and Omar and Curtis spend the night together.

That complication brings out discussions of race, entitlement and self-loathing that grow quite serious. Before the production turns into something far too serious for its own good, JC Lee diverts the tension with humor. While some may have preferred a deeper discussion of the issues, the purpose of the weekend was fun and celebration, so the characters are perfectly happy to lighten the mood.

The characters of Bernie and Omar are outsiders to this. Bernie is a member of a generation earlier and Omar of a later one. From their perspectives, these men in their 30s are historical oddities. Being gay doesn’t alter the inability of people from different generations to achieve a meeting of the minds. Bernie sometimes sounds like one of those oldsters going on about Woodstock while Omar seems a 20-something who doesn’t understand what all the fuss is about because a lot of the battle happened before he got here.

Throughout most of the play, we await the arrival of two other characters. Eventually, Jeff (Carman Lactvita) turns up without his partner as they were fighting all weekend and broke up. Quite why this character is necessary is hard to say, and his arrival marks the search for an ending. Curtis and Castor have their fight with Curtis announcing they are not friends any more, but rather than leave, he and Curtis hug and carry on as if all were forgiven. Lee and Bernie join them to shoot a drag video for social media. The last 10 minutes of the play just don’t ring true to life.

That said, the show does address important issues without becoming preachy or demanding the audience accept a particular point of view as the only valid one.

“To My Girls” is playing now through April 24 at the Tony Kiser Theater, 305 West 43rd Street, New York City.