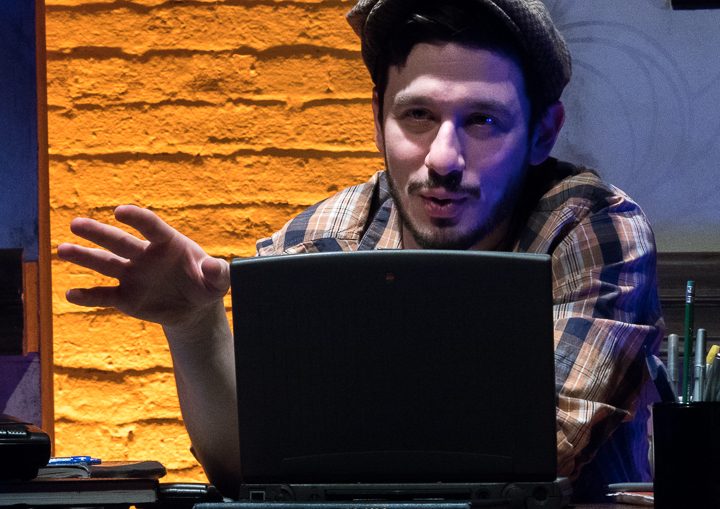 DOCTORS JANE AND ALEXANDER is a deeply intimate journey through the deconstructed thoughts of the playwright, Edward Einhorn, as he wrestles with memory, nostalgia and doubt. UNTITLED THEATER COMPANY No. 61 presents this world premiere that interrogates Einhorn’s lineage as the grandchild of the famous doctor, Alexander Wiener, who discovered the RH factor in blood. While this is the jumping off point, the piece is far more complex and layered as a mediation on the challenging bonds of one’s blood family.

Einhorn sets out to discover as much as he can about his enigmatic grandfather through interviews with family members in order to understand what he has inherited from his ancestors. The central person for these in-depth discussions is his mother, Jane Einhorn, a PhD psychologist and visual artist. These text fragments are a mixture of verbatim and found pieces that lend an authenticity to the dialogue that powerfully pulls you into the story. The birth of the idea of the play coincides with the stroke of his mother some years back, and while she was still in a mostly lucid state he was able to coax stories, anecdotes and perspectives from her that forms the spine of the play.

Einhorn had inserted himself into the production as a character and it is a genius place from which to experience the drama. Scenes shift like thoughts uncontained and we follow the plot turns organically as one interaction naturally gives rise the next – like a satisfying stream of consciousness. I enjoyed the form where the playwright is deconstructing his perceptions and family ties in front of you, letting you into family secrets, scandals and successes. He questions himself, his own struggles with anxiety, notions of “achievement” and his place in a family of overachievers. The vulnerability that he writes into the show is extremely moving as he allows his own doubts, sense of failure and family pressures out into the space for us to dissect. A very brave act.

We meet the larger than life grandfather whose celebrity still runs through the family like a blood stain impossible to remove- a legacy that is almost too difficult to live up to and that causes ripples of low self esteem through the descendants. The family seem to push themselves to the edges of their mental and physical capacity in pursuit of living up to the family name and achieving super success in their own chosen fields. We also meet Einhorn’s lawyer brother and a cousin or two, the family doctor, a  caregiver and a few contemporaries of Alexander Wiener. Anything is possible when we are in the playwrights head where fantasy and reality co-mingle and you suddenly find yourself in the middle of a humorous musical number with dancing doctors punning on contentious medical viewpoints. Alexander Wiener was also an amateur composer and his music is used throughout the show.

Another element of the show that I particularly enjoyed was the use of his mother’s artworks in the stage design. Her vibrancy and love of life in all of it’s emotional complexity are expressed in the paintings festooning the walls. (You can walk through Jane’s gallery after the show). Through the compositions of the grandfather, the art works of the mother and the language prowess of the grandchild we also see the strong creative line that has been handed down in the DNA of the generations.

I have had the pleasure of seeing a few of Edward Einhorn’s plays and under his direction  you are always assured of seeing a strong cast, housed in a perfectly executed set with all of the bells and whistles that constitute a professional production. Alyssa Simon as Jane inhabits the stroke held body with great focus as well as conveying the vitality of the youthful aspect of the character with energetic vigor. A beautifully crafted performance. Len Rella as Alexander gives us a myriad of well crafted aspects of this legends character – encompassing the fast paced verbosity of the intellectuals inner thoughts; the quiet, measured public speaker; the charismatic thinker; the gregarious musician and lyricist. I particularly enjoyed Max Wolkowitz performance as Edward Einhorn. He magnificently captured the torment of sibling rivalry, the anguish of the artist, the joviality of the faithful son and the mannerisms of the real life person he embodies on stage.

Craig Anderson, Yvonne Roen and Anne Marie Yoo and Maxwell Zener (as David, the brother) give heartfelt, sincere performances as the family members and support characters. They handle the memoir content with sensitivity and honesty.

The production team have created the life environment of Edward Einhorn’s memories with obvious skill. The set is lush, rich and full of color. You feel quite comfortable in the “sitting rooms” of the playwrights psyche. Ramona Ponce has ensured costumes that expertly define different time periods and she also uses clever quick change items for the character’s playing many roles. Federico Restrepo’s lighting design personifies “success” with his warm, bright lighting plot but he also allows for moments for the “shadows” that cloud the mind. Musical directer, Richard Philbin, creates magical harmony with only piano, violin and voice. Patrice Miller delightfully choreographed the tongue in cheek playful rendering of Alexander’s music.

I am most fascinated by what is largely left out of the play  – Einhorn’s grandmother and his own father’s stories. I wanted to get to know them as well to get some more color on the factors that shaped him. Basically, I am invested in the characters, like in a soap opera, and you want to know all of the players in this particular family drama. A sequel perhaps?

Developed with Ensemble Studio Theater, as part of a Sloane Grant for work with a scientific theme.