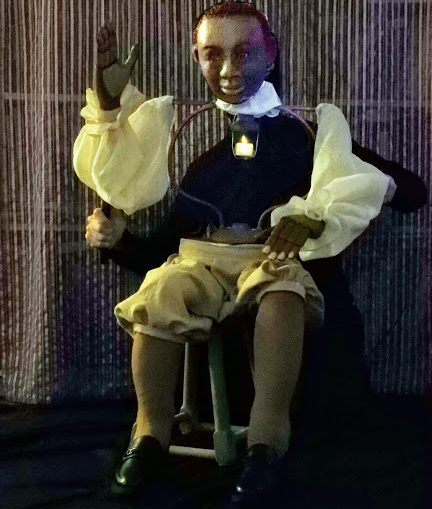 Imagine being  a primarily self-taught scientist who wrote several almanacs, built a clock that ran 50 years, corresponded with Thomas Jefferson and was so brilliant performing measurements you were invited to survey what become Washington, D.C.  With those accomplishments you’d rate a statue in the Nation’s Capital, right?  Afraid not.  Benjamin Banneker (1731-1806) has a Park, but still no monument.  The current administration and their congressional minions are too busy building false facades to themselves to recognize the accomplishments of a great African-American thinker – or any for that matter.  In place of permanence and as a precursor to Black History Month, director-designer Theodora Skipitares and students from Brooklyn’s Benjamin Banneker Academy  pay tribute in the world premiere of The Transfiguration of Benjamin Banneker at La MaMa through February 2.

Since Banneker was a big thinker, Skipitares presents the facts in big ways that wowed both the young matinee attendees and slightly older La MaMa regulars.  After a rousing welcome from Banneker Academy’s Soul Tigers marching band, the stage darkens revealing the solar system.  Puppet operators turn each planet around revealing the faces of scientists  Mamoud Kati, Seleucus, Copernicus and Banneker (whose voice is provided onstage by Reginald L. Barnes).  The meeting and marriage of Banneker’s White English grandmother Molly and ex-slave grandfather Banneka is told against a white screen with black-and-white animation and live shadow puppetry.  Here, black-and-white is anything but symbolic; the former indentured servant freed and married her knowledgeable farmhand despite Maryland laws banning interracial marriage.  Molly and her daughter Lucy educated Benjamin and his sisters.  This is when Banneker, a three-to-four-foot puppet operated by three handlers, makes his entrance to LaFrae Sci’s music accompanied by dancers (several from Banneker Academy).

While no lecture, Skipitares digresses, putting Banneker’s legacy in truer context.  The celebrated correspondence with Jefferson (voice provided onstage by Tom Walker) is a sound-off between two drummers; late mid-century historians uncovered Jefferson’s private life as lacking his Age of Enlightenment beliefs.  A gorgeous soft sculpture of Astronaut Frank Borman (Walker) flies over the audience as he recalls his flight instructor, Chuck Yaeger (of The Right Stuff) telling him and fellow (because then they all were) pilots to avoid Ed Dwight, soon rejected by NASA on the basis of race.  Dwight became a sculptor specializing in famous African-Americans.  His of Banneker was rejected for the never-started D.C. monument.  Another soft sculpture (if the production, La Mama or the Banneker Academy doesn’t want it, I’ll take it!) of Lieutenant Uhura/Nichelle Nichols’  (voice provided onstage by puppeteer Alexandria Joesica Smalls) perfectly coiffed head poking out of the USS Enterprise.  Her tale is one of the best-known in Trekkie lore: Dr. King’s advice at NAACP dinner not to leave Star Trek.  Nichols not only continued her Starfleet mission through three television seasons and five films, she added to it as a NASA recruiter.  Difficult, frustrating and too-often repeated, these examples prove artistry and honesty somehow prevail.

With the exception of The Almanacs, his journals and a few papers, Benjamin Banneker’s life work was destroyed in a fire the day of his funeral.  Foul play or coincidence suffering the same fate as The Alexandria Library and destruction of Syrian artifacts?  The Transfiguration of Benjamin Banneker reminds is that his words are more permanent and beautiful than a public offering:

The Sun with all of its attendant planets is but a very little part of the grand machine of the universe.

A star though it appears no bigger than the diamond that glitters upon a ring is really a vast globe, like the sun in size and glory, no less spacious, no less luminous than the radiant source of the day
so that every star is not barely a world, but the center of a magnificent system, has a revenue of worlds, irradiated by its beams, revolving around its attractive infuence,
all of which are lost to our sight in unmeasurable wilds of ether.

Remaining performances of The Transfiguration of Benjamin Banneker are January 30-31 and February 1-2 at The Ellen Stewart Theatre @ La MaMa (66 East 4th Street between Bowery & Second Avenue).  Tickets can be purchased here.