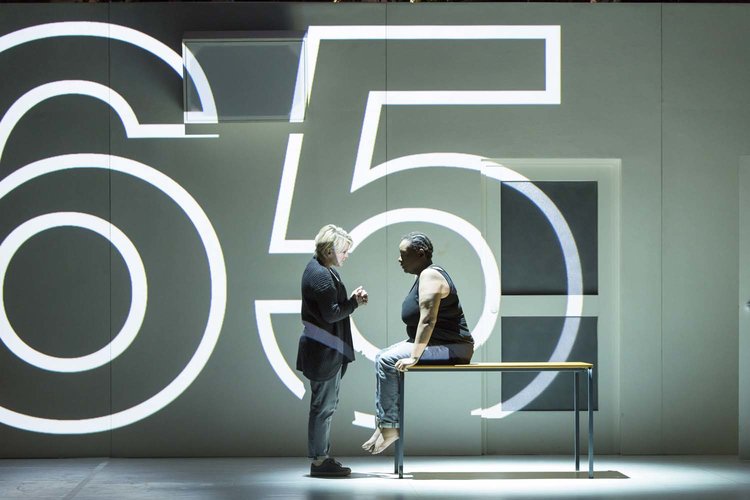 Great art is meant to bring the viewer into another universe, perhaps allowing them to — if only fleetingly — experience previously unimagined scenarios, feelings and worldviews. It has the power and potency to connect us to the broader spectrum of emotions that make up the human condition. But what happens when this art is a semi-autobiographical piece of essentially heightened, poeticized and dramatized non-fiction that could be and has been regarded as “a 75-minute suicide note” (Michael Billington, The Guardian), such as 4:48 Psychosis — the stark, often brutal, occasionally darkly comedic and deeply unsettling post-mortem work of English playwright Sarah Kane that is an exploration of clinical depression?

PROTOTYPE: Opera/Theatre/Now has never been known to shy away from provocative, risky and bold performances and subject matters through utilizing the sometimes stale mediums of opera and music-theatre to reveal truths, investigate the issues and topical concerns of our era in innovative, cutting-edge ways. Naturally, there could be no other festival or forum to present the U.S. Premiere of 4:48 Psychosis reimagined as a piece of opera-theatre. The production — the first of such an adaptation of Kane’s controversial yet acclaimed and regularly performed play — was originally commissioned by the Royal Opera House and played at the Lyric Hammersmith in spring 2016.

It seems a near impossible task to compose and shape a musical performance about such utter despair that would propel a person to take their own life before they could even witness the fruits of their own labor, but it is due to the deep reverence and respect the creative team (composer Philip Venables, director Ted Huffman and conductor William Cole) clearly have for the tragic playwright’s masterful final contribution, that allotted them the approval from Kane’s brother and her estate. Even at a glance, the text of 4:48 Psychosis is well-suited for such a treatment: There are no clearly defined character and the words are lyrical and poetic, so much so that even in the throes of their ugliness or relentlessness, there is an inherent melody to them. Of course drama and true tragedy are rich territories for opera from any time period, but the reality and recentness of the piece as well as the events that haunt and surround it (the whole work is the elephant in the room) makes it an extremely ripe and juicy forbidden fruit for contemporary opera-theatre of today. Composer Philip Venables described the process as a man possessed, explaining that Kane’s text has “all of the attributes of an exciting opera libretto” and of his process he proclaimed, “Surprisingly, in the face of all of the darkness of the story and the tragic circumstances of Sarah Kane’s own lost battle with depression, it was nothing but exhilarating to write.” Venables read the play “50 times in a nine-month period before writing any music,” and cites his collaboration with director Ted Huffman as a key force behind the operatic adaptation’s success and resonance.

The harmony of their collaboration is clear, as is the wisdom of the stellar choices of the cast, musicians and other creative team members who all did their part to breathe life into the brand-new interpretation of such a challenging and complex, yet celebrated and vital piece of theatre. Six women (Gweneth-Ann Rand, Lucy Hall, Susanna Hurrell, Samantha Price, Rachel Lloyd and Lucy Schaufer) comprised the characters in the text who vocalize by singing operatic soprano verses, speaking in melancholic monotone or, at particular times, wailing in absolute lamentation at a glass-shattering pitch. They wander like zombies aimlessly around the clinical, sterile set by Hannah Clark (who also designed the comfort-wear attire seen in an institution where harm to one’s self or others is a genuine threat), only ever lit by a single source of light (design by D.M. Wood) appearing from ever-changing directions and casting heavy shadows on their faces. The chorus chants feelings of self-loathing and dissatisfaction with life contrasting against the doctor’s commentary projected on the wall (video design by Pierre Martin), which seemed rather patronizing and unsympathetic to the patient’s condition of complete hopelessness.

The projections are a welcome addition and give the clever and harrowing text the centerstage attention it deserves visually while sometimes leaving the verbalization to sound instead of speech or song, for pure music can communicate what language and the human tongue are not always able to express. Venables has been described as “one of the finest composers around” (Guardian) and his work has been hailed as being “brutally effective,” (Times UK). These accolades seem well merited from the incredibly layered, multi-dimensional, complex and emotional sonic interpretations. Sarah Kane’s bold, unflattering admissions and intimate confessions speak the unspeakable, and Venables’ compositions — executed with passion and intensity by the fourteen-piece orchestra comprised of a pianist, piano synthesizer, alto flute and piccolo, three soprano and baritone saxophones, three violas, one violin, a contrabass and multiple percussive instruments — portrays the depths of a multitude of emotions that words can never fully convey. Music has the power to lift one up to the heavens or drag you down to hell. Perhaps this particular adaptation has demonstrated the only true means of communication that is so primal and all-consuming it cannot be expressed by the more sophisticated format of language (though Kane does an excellent job at trying to do just that).

The soundscapes range from dull droning and elevator music, tender and angelic orchestrations, to sleepy tunes, cathedral calls or creepy circus and carnival themes (Venables infuses a good dose of gallows humor into his compositions as Kane does into her text) into a violent, chaotic and frenetic cacophony as the descent down the rabbit hole of such a pained mind goes deeper and deeper, with shrieking strings, wailing horns and hard plunking on the piano keys. Still, somehow, it never feels like noise and always maintains a sense of enchanting melodic beauty despite the swirls of sadness and fury, much like Sarah Kane’s text — which perhaps offers some perspective on the play’s pervasive presence, lasting appeal and timeless significance.

But by far the most powerful, poignant, inventive and memorable moments of this interpretation of 4:48 Psychosis were the percussive dialogues between patient and doctor, where the text would be projected on the wall and percussionists Amy Graphic (as the Doctor) and Clara Warnaar (as the Patient) would have a call and response that volleyed with text, vocalized by saw, metal rods, hammer and timpani drums, among others, to communicate the lines in a way that seemed much more befitting of such a dramatic exchange, while still honoring the text and author’s original intentions. It elevated the back and forth to something astoundingly unique, creative, completely transfixing and perfectly relevant to the piece. This interaction, which occurred several times within the production, was by far the most resonant and innovative exploration and it would be welcome to see more of this kind of instrumental dialogue more often.

Depression is a topic that, uncomfortable as it may be, deserves representation and examination, not from an outsider or a clinician, but from a person like Sarah Kane who experienced such indescribable internal anguish firsthand, and was able to articulate and express those feelings, then present them in an extremely intelligent, compelling yet unnerving, at times delightfully witty but always painfully honest work of art and drama that is structured yet free and open to so many interpretations. It seems as if Kane is almost inviting and challenging those who are bold enough to dare to perform and present her complex work to do so, and in their own way.

With so many in the world who suffer from clinical depression, who are or aren’t on medication for it or have contemplated suicide, it is important not to turn a blind eye to such suffering and though this is one person’s individual experience, there is a relation and commonality that is important to see portrayed on a larger scale.

Public figures who seemed to be the pinnacle of success and lives well lived such as Kate Spade, Robin Williams and Anthony Bourdain shocked the world and many who knew them well when they suddenly ended their own lives. Countless others of every age and nation have chosen the same fate. This is not something we should or can ignore. Though the field of mental health is evolving and improving, there is still a long ways to go and it must begin with reducing the stigma around depression. Productions like this are great leaps forward into understanding and empathizing with the anguish of another.

There is a cult following for Sarah Kane the same way there is a cult following for Sylvia Plath, but for those who are intrigued by these brilliant yet deeply troubled female figures, it should be noted (not in all cases but many) that the attraction and interest tends to lie less in the fascination with the macabre and more in the connection to another human being who can express a similar sense of hopelessness, boredom, anger and misery in a poignant, dimensional way that may mirror their own experiences. Misery loves company and there is power and relief in feeling understood and not alone. Kane’s bravery in laying bare her worst may serve as some comfort for others or offer a glimpse of what such depression can feel like for those who have and may never fully encounter it within themselves. And isn’t that the goal of great art — to lead us into a deeper understanding of the human condition?

4:48 PSYCHOSIS is playing January 5-12, 2019 as part of the PROTOTYPE Festival at the Rose Nagelberg Theatre at Baruch College. For tickets and more information see: http://prototypefestival.org/shows/4-48-psychosis/

Photo Credits: Photos of the PROTOTYPE production are by Paula Court. Top/Cover image: Lucy Schaufer and Gweneth-Ann Rand – Photo by Stephen Cummiskey for the Royal Opera House premiere in London.