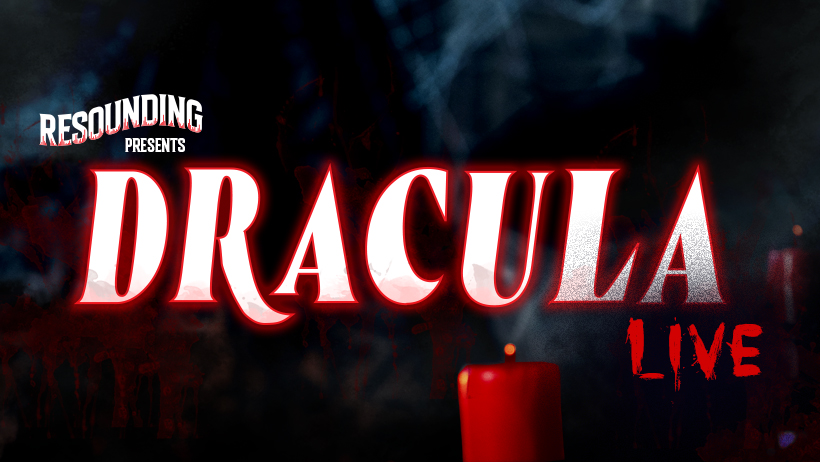 There is something deliciously lovely about turning off all the lights in the house and listening to a horror tale on a rainy autumn night. So with the mood set, I accessed Resounding Live Immersive Audio’s “Dracula” on my smartphone with my headphones plugged in. The result was radio theatre for the 21st century.

The script was an hour-long edit of the Bram Stoker novel, and so a great deal had to be left out. Fortunately, one can leave out Renfield and the asylum and lose nothing much of the real tale. The truth is Stoker wrote more than he needed to and a good edit is always useful. The result is a fairly quick pace to the telling of the tale.

The cast in an audio-only production have but one weapon to use from the usual actor’s arsenal, the voice. The production stands or falls on the vocal interpretation of each role. In this case, Norm Lewis providing the voice of Count Dracula brought an eerie elegance to the role and at times a genuine predatory evil. In counterpoint, Chris Renfro as Jonathan Harker played the innocent in the bat cave with as much care. The result was an initial exchange between the two that set the standard for the rest of the show.

Lindsay Nicole Chambers and Siho Ellsmore first perform as Dracula’s wives in small parts before taking on the roles of Mina Murray and Lucy Westenra respectively. From the cackling of the wives to the role of victims in each case, they demonstrated how much the voice alone can do.

Rounding out the cast are Dick Terhune as Prof. Van Helsing, Stuart Williams as Dr. Seward and John Stimac in the role of a ship captain. The accent for Van Helsing made the character and Williams played Seward with just the right mixed of restraint and anxiety. My only complaint about Stimac was that he might have been used to even greater advantage given his bass-baritone and operatic training. I think this was a case of a missed opportunity. Then again, casting director Holly Buczek would have needed a longer script, and that would have detracted from the overall impact.

Be that as it may, the additional star here is the Resounding audio platform. It is a new, proprietary technology that creates a live 360-degree soundscape of howls, bats, screams, creaky floors, slamming doors, and everything that goes bump in the night. I have been a fan of radio plays for ages, going to sleep at night listing to PBS broadcasting Masterpiece Theatre as a teen, and getting through endless Sunday afternoons in London thanks to Radio 4’s productions.

What Resounding has done here is simply wonderful and I am grateful for the advice I had from the team there to listen on headphones. The characters and sound effects had the action moving around in my head in a way I had not experienced before. Dave Horowitz is the Director of Technical Design, but frankly, Wizard of Wonders is probably as apt a title. Jen Ash as the Production and Broadcast Director did not waste any of the technology’s possibilities. And I need to point out that this was all done remotely, with actors in different locations from Astoria in Queens to the Upper West Side of Manhattan to California.

Director of Operations is a mundane title but Blair Russell is the man that made this operation the high-quality product that it is. Having brought Jeremy O. Harris’ Slave Play to Broadway, his participation here makes me think Resounding has a bright future.

Finally, there is Steve Wargo, the Creative Director. While I have never met him, it is clear we are kindred spirits, Radio Theatre geeks. He said, “I’ve been thinking for the better part of a decade about how to leverage the internet to increase audience and participation in the theatre in America and the world. My initial ideas were to recreate the style and substance of the broadcasts that Orson Welles and his Mercury Theatre performed live on the radio in the late ’30s. Time passed, other projects came and went, then the pandemic hit, and this idea became front and center. We have an amazing team and now we have some fancy patent-pending new technology on our hands, something potentially revolutionary. And what better way to launch that with the great Norm Lewis as Dracula for Halloween.”

Frankly, I can’t think of one.