Jaclyn Backhaus is breaking bread and building enduring bridges with her epic theatrical feast –India Pale Ale. It’s a story of close knit family claustrophobia, of big dreams never spoken out loud, of lost love, of the rhetoric of “othering”, of ancestors that arrive in the present moment when courage is required and of the ocean of life carrying curious people to new lands. It’s crammed full of everything – a lucky packet of sensations. We zoom into complex, naturalistic family interactions and then suddenly zoom out into a Punjabi Bhangra dance celebration. You are constantly taken by surprise with a narrative that keeps expanding and evolving as we travel from the microscopic focus on this one family, to lifting off into the macrocosm of global politics, cultural hegemony and open hands extended across huge divides. And there is this effervescent cast of thousands – well nine actors, that fill up the stage with contagious optimism and fervent commitment to the message of the piece.

We meet the Batra family living in Raymond, Wisconsin. Deepa and Sunny are preparing to celebrate the imminent wedding of their son Iggy to Lovi. The langar hall starts filling up and the atmosphere is charged with old wounds, unrequited love, secrets and gossip. As the family begin with the preparations for the festivities, Basminder, the daughter, declares that she is moving away from her home town to open a bar. But this is not the only challenge the Batra’s are going to face. A series of seismic events are waiting in the wings to unseat us all. Backhaus explores the minutiae of a family’s communication in pithy dialogue and then explodes this small, contained universe by bringing in bigger discourses like the one played out so eloquently in the bar scene between Basminder and Tim, the customer. The metaphoric and fantastical also have a place in this textured piece giving us a way to recover from the shocks we experience in the plot speed bumps. It’s a huge text that shines a light on the path towards mutual understanding.

Will Davis’s direction and choreography is lush, adventurous and captivating. The staging is inventive and he inspires a sense of urgency in the performers to grapple with the text and make it fly. He finds the perfect balance between the naturalistic and metaphoric elements so we move easily between reality and a dream-like state. Davis has crafted a highly entertaining yet deeply rooted, emotionally intense production.

Shazi Raja as Basminder “Boz” Batra is electric in the role of the fiery, independent daughter channeling the energy of her long lost pirate ancestor. She is a mighty talent with a massive presence. Raja really leans into emotions, she inhabits them fully and we feel every shift in her world through her exceptional ability to convey truth. It’s a big part and she catapults into the stratosphere with her command of this role. Sathya Sridharan as “Boz” younger brother, Iggy, is a delicious clown. He drives the comedy of the piece and can contort himself into any posture in order to wring out any humor that might be hiding there. He has funny bones and brings welcome relief from the heavier moments. Sridharan performance is like the anticipation of the pop of a champagne cork – he is the master of the bringing attention to the right moment. It’s a joy to watch him perform. 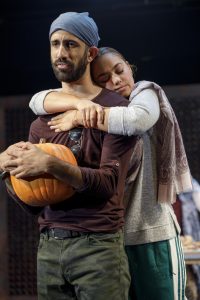 I really enjoyed Alok Tewari as the father, Sunny. He has such incredible stature on stage and brings an elegant charisma to the role. I think Jaclyn Backhaus gave him a beautiful character to step into – one with deep compassion and a groundedness that anchored the piece. Purva Bedi gives a sensitive portrayal of Deepa – a mother who has faced too much loss. She is the heart of the play, trying to hold the family and the community together and exhausted by the immense effort it requires.

Angel Desai as Simran Rayat is the playful sidekick, busy body and all round aunt you just adore. Sophia Mahmud as Dadi Parminder, the grandmother figure, beautifully embodied the wiser older generation who says her mind and laughs in the face of fate. Nate Miller was fantastic as the white guy who can’t help putting his foot in his mouth. He was entirely lovable and Backhaus goes easy on the character and viewpoint he represents. She shows us a different way to have conversations around race, ethnicity, culture in this poignant, well observed, spot on scene about “otherness”, between Tim and “Boz”.

Nik Sadhnani as Basminder’s ex-boyfriend, Vishal, is a shooting star. He blazes across the stage, catching your attention before darting off below the horizon. You look forward to his sudden appearances. Lipica Shah as Lovi, the fiancé, gives us an animated, youthful, blushing bride-to-be and then an emboldened woman standing her ground. Together, these 9 actors open your heart and climb inside.

I found Neil Patel’s Scenic Design mesmeric. What appears to be a simple open stage area quickly transforms, revealing hidden compartments and shifting spaces. A langar becomes a boat, an ocean, a veil between the living and the dead. It’s breathtaking. Ben Stanton’s striking lighting design evokes a feeling of longing, loneliness, loss and of course – love. The color palette is rich and complex –it was like an sea that holds the “boat” aloft.

The costumes designed by Arnulfo Maldonado are glorious –particularly the pirate scene, where the fabrics, textures and colors were like rainbows dancing. I loved them. Sound designer Elisheba Ittoop also composed the extraordinary, original music for the production that stirred all sorts of emotions in the audience as the underscoring took us on little mini flights of fancy. Dave Bova expertly fashions the Hair  Makeup Design for the show.

It’s a strong piece that I am sure is going to run for a long time. It certainly is an essential work needed at this time of great divisions. Its message is powerful. (My only reservation is that I think Backhaus could relook at the end speech as it felt slightly didactic. The way the cast connect with the audience is all that is required (for me). The play has already said it all. We feel it’s message viscerally, the additional speechifying is gilding the lily.)

Support for India Pale Ale is provided by The Harold and Mimi Steinberg Charitable Trust.

Running time: 2 hours with one intermission.