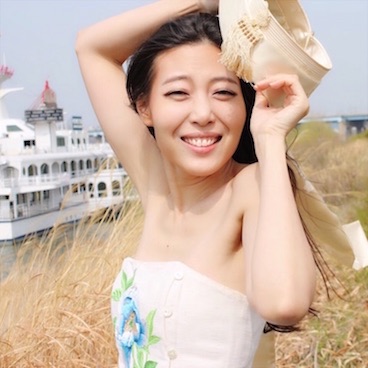 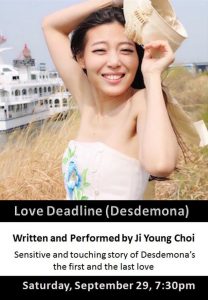 This is the third time I have had the honor of reviewing a show by the colossal talent that is Ji Young Choi. She is a South Korean performer who blends classical Shakespearian texts with rituals and cultural practices from her home country to create an entirely new form. In Love Deadline she tackles the inner thoughts of the character of Desdemona as she stays isolated in her tea room for seven days wrestling with the source of Othello’s unexplained rage. This production had its world premiere at the United Solo Theatre Festival – a perfect platform for a solo artist to explore their artistry.

Ji Young takes creative license in giving voice to a South Korean Desdemona and fashions a deeply moving monologue. Dressed in a traditional hanbok dress she invites us into her world as she begins her Dado “the way of the tea” ritual. It is supposed to help one to mediate and cleanse one’s mind of the stresses and worries of daily life but Othello’s actions have her thoughts in such turmoil she is unable to relax and self soothe. She wracks her brain trying to find the reason for his behavior and what part she has played in his sudden change of affection.

In her inner narrative she contextualizes this Shakespearian tragedy in a Korean cultural landscape. She is a submissive wife whose focus is to maintain harmony in all interpersonal relationships and to preserve her husband’s “kibun” (pride, mood, state of mind) to keep a peaceful, comfortable atmosphere at all times. But Desdemona’s Nunchi (ability to gauge another person’s kibun) seems faulty in regard to Othello. Her inability to read him is placing her in immense distress. She can feel there is a deadline looming – a love she thought would last forever now seems to be running out of time. Choi uses the butterfly effect as the central metaphor for a chain reaction of events that gain momentum with catastrophic outcomes. The shaping of this exquisite work was supported by dramaturge Dong Eae Kim.

Ji Young Choi has crafted a powerful piece where we feel the sand in the hour glass running out before our eyes. We know the tragic end is coming and she uses every second to explore the complex emotions of a woman who has been unjustly treated and who has no resources to communicate with a man with a thorn in his paw. Choi cleverly weaves in some of the original text at heightened emotional moments and she fills in the gaps with a poetic first person outpouring of personal stories. It is riveting. Another Korean element that is echoed in the piece is the Salpuri, a ceremonial dance to exorcise evil spirits and back luck, where the dancer moves with a long handkerchief which in the Othello context is quite a brilliant addition. It is supposed to be one of the most powerful expressions of “han” – a mixture of deep rooted anger, grief and longing.

Ji Young Choi as Desdemona is like a beautiful soap bubble floating on the air. We know that she will dissolve shortly but we cannot help but be spellbound by it’s fragile, transitory magnificence flooded with refracted color. As a performer she is like rare imperial porcelain – authentic, enduring and stylish. Choi is an innovative theatre maker and mesmerizing performer capable of taking the audience on a worthwhile journey. I look forward to seeing what wonders she will dream up for her next visit to NYC. She always creates an unforgettable, delicate, theatrical snowflake that is gone too quickly.

This production was co-produced by Sun Young Choi and is a sophisticated work that is ideal for festivals around the world. The United Solo Theatre Festival is overflowing with a program of truly exceptional one-person productions that celebrates the uniqueness of the individual. I urge you to discover the immense smorgasbord of inventiveness at this years festival.