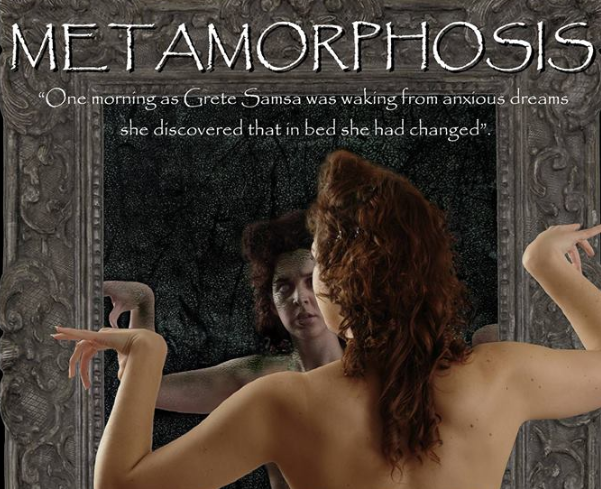 One of the highlights of this year’s edition of the Annual Fringe Encore Series is Sam Chittenden’s take on Kafka’s novella, “Metamorphosis.” While the script is intriguing, the performance of Heather-Rose Andrews in this one-woman show is what makes the production stand out.

Kafka’s tale is simple enough, Grego Samsa wakes up one morning to discover he has changed into an insect. Chittenden spins this in an interesting way by using Greta Samsa, Gregor’s much younger sister, to tell the tale. Her metamorphosis from child to woman takes place against the backdrop of her brother’s unlikely and disturbing change. Gregor’s change affects the entire family not just him. Greta’s own changes are thrown into the background as her parents focus mainly on her brother the bug.

The script borrows from the novella but also, as Chittenden has said, “My version of Metamorphosis draws not only on the original story, but on the diaries and letters of Kafka and his favourite sister Ottla. It echoes their real-life relationship and the difficult dynamics and tragic fates of Kafka’s own family, exploring themes – such as emotional and physical abuse, and racial prejudice – that are very relevant today.”

The script needs some editing and tightening to realize its true potential. Greta’s own story doesn’t truly start until the lodgers arrive some 20 minutes into the hour long production. The deportation of the Samsa family to concentration camps feels bolted onto Gregor’s tale, but if it were more fully integrated, could prove a powerful warning as well as being able to further the metamorphosis from civilization to barbarism.

At the same time, Chittenden’s command of the English language is such that one would hesitate to change a word. Perhaps the way is to reorder them and add to what is there. And if one is unfamiliar with the novella, one is at a disadvantage that could be readily remedied with a few well-crafted lines at the beginning.

This production reaches the heights that is does thanks to what must be a physically and emotionally draining performance by Ms. Andrews. With voice and posture, she shifts from child to woman and back again as the lines require. She and the playwright choreographed the piece together, and this enabled them to take fullest advantage of her capabilities. It raises the question of whether another actor could perform this piece and make it work or whether this is best as a vehicle for Andrews.

The reviews this production received at the Edinburgh festival this summer and at Brighton in 2018 were uniformly glowing, and its arrival in New York is a blessing.

Every year, the SoHo Playhouse’s artistic director, Darren Lee Cole, curates the Fringe Encore Series that brings productions from around the world ranging from serious and cerebral to silly and child-like. Given the range of productions and the affordability of tickets, this series is rapidly becoming one of my favorite holiday events.

For further information about the Fringe Encore Series, visit its website.