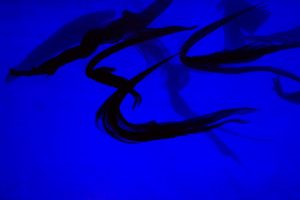 Recently, two opportunities arose to hear Hector Berlioz’s “Symphonie Fanstatique” within days of each other.  This isn’t surprising – it’s been a crowd pleaser since its 1830 premiere .  With that also comes with a lot of  “over”s” as in over-programmed and overwrought.  Happily, both Bard College’s Orchestra Now (TŌN ) conducted by Music Director/College President Leon Botstein at Lincoln Center’s Frederick P Rose Hall and Basil Twist’s landmark abstract puppet ballet at HERE encouraged audiences to forget everything they thought they knew about this music to discover it for themselves.  Their thoughtful invitations to do so succeeded.

Limited program notes made sense at both venues, but it’s worth putting Berlioz (1803-1869) in perspective.  “Symphonie Fanstatique”‘s sound picture was the first of its kind because it is neither abstract nor noble.  Instead, the French composer explicitly expresses his love for Irish actress Harriet Smithson, whom he eventually married.  “Love” is a mild way of describing it because opening waltzes gives way to  frenzied obsessive climax.  (Kubrick put the final movement’s “Witches’ Dance” to appropriate use in “The Shining”.)   Berlioz gained musical immortality with “Symphonie Fanstatique” but also wrote the hypnotically passionate symphonic choral works “Roméo et Juliette” and “La damnation de Faust”, the brilliant two-operas-in-one retelling of “The Aeneid” in “Les Troyens” and a somberly beautiful Requiem.  Additionally, his “Memoirs”are ranked among the best written along with those of Ulysses Grant, Elie Wiesel, Maya Angelou and Katherine Graham.

Another of “Symphonie Fanstatique”‘s firsts was its orchestration for 90+ musicians.  Berlioz opted for five movements instead of the usual four.  Others who built on his big sound/big idea include Richard Wagner, Richard Strauss, Gustav Mahler, Edward Elgar, John Adams and Walter Braunfels.

Walter Braunfels?  He (1882-1954), as TŌN’s concertmaster Coline Berland explained to the audience, was a half-Jewish German composer denounced by Hitler.  His post-World War II reputation was never restored because he remained an unapologetic Romantic in an era of Formalism, Indeterminacy and Jazz-infusion.

What makes music making from Bard exciting is Botstein’s proven ability to connect with audiences beyond Annandale-on-Hudson by programming music that is new to most of them.  Their March 29, 2018 concert opened with Braunfels’ “Fantastic Appearances of a Theme by Berlioz”. The almost-hour long 1914-17 work fuses musical and autobiographical themes.  The “Theme” Braunfels uses isn’t from “Symphonie Fanstatique” but “The Song of the Flea” from “La damnation de Faust”.   This simple sharp march illustrates the composer’s service in the German Army during World War I.  Along with sounds of destruction are those of chivalry, courage and love of nature: the same as his better-known contemporaries.  Braunfels captures a pastoral world ending while another beginning in chaos.

TŌN’s ease with this “new” music carried into their performance of “Symphonie Fanstatique”.  The only story it told was the joy in the young musicians’ faces playing music spinning wildly out of control.  Botstein is attentive rather than demonstrative but was as pleased with the results as the enthusiastic audience.  The Rose has not only perfect acoustics, auditorium seating is configured around the orchestra.

In pre-revolutionary Russia, pianist/composer Alexander Scriabin added color lights for effect to concerts and recitals.  Whether Walt Disney was familiar with the concept or not in 1940 , an abstract rendering of J.S. Bach “Toccata and Fugue in D Minor” combining animated lines and colors, James Wong Howe’s cinematography and The Philadelphia Orchestra opened “Fantasia”.  In 1998, Basil Twist took the abstract bigger and further with his “Symphonie Fantastique”.  It is back at HERE for the dual celebration of the show’s twentieth anniversary and the cultural institution’s twenty-fifth.  Twist is not only a MacArthur Genius but Director of HERE’s Dream Music Puppetry Program.

His orchestra stage is a 500 gallon aquarium he customized with his grandfather, also a puppeteer named Basil.  Instead of marionettes, the performers are made from – to name a few – silk, feathers wire, crystals and tubing.  A team of four puppeteers maneuver the creatures on platforms above the tank.  After the show, audience members are permitted backstage to see the tank, talk to the wet-suited puppeteers and see “the performers” drying out.

The other performer is pianist Christopher O’Riley, who like Botstein and Twist, is an avowed arts educator. He plays Franz Liszt’s arrangement of the entire score and acted as the stand-in for Berlioz and his unhinged alter-ego.

Video of “Symphonie Fantastique” is all over the Internet.  While this makes the iconic show accessible, it cannot be emphasized enough that there is nothing like experiencing it live.  HERE’s Mainstage Theatre is cloaked in black with an elaborate red house curtain at its center.  Twist’s images are hypnotic.  Air bubbles are synchronized reminders of where they are created, but the rest is more trippy than Berlioz ever dreamed.

Because nothing is absolute and everything open to individual interpretation, suggested images include sea creatures, amoebas, cells, dragons, and a beautiful shiny shape sprouting teeth.  Prison bars appear during Fourth Movement’s “March to the Guillotine” while in quieter moments silver stars shine against an azure sky.  And briefly, the “Sound Track” that appears as a character in “Fantasia” and when a film print isn’t in great condition.  It’s like having a good dream despite the scary parts.

Running Times: TŌN: 2 hours and 30 minutes with 1 intermission.  HERE:  55 minutes without intermission, late seating or leaving the theatre once the performance begins.

Basil Twist’s “Symphonie Fanstatique” continues through July 15, 2018 at HERE  (145 Sixth Avenue, NYC).  Further information and tickets information on their rush policy are posted on their website  . Basil Twist has his own website as well.