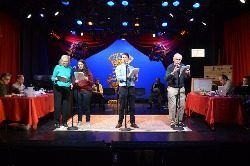 Before television, there was the “Golden Age of Radio.”

Plays on the radio were a major form of entertainment, from kid shows like “Little Orphan Annie” to the “Guiding Light” (yes, the show started on the radio), from “The Shadow” to “The Jack Benny Show.”