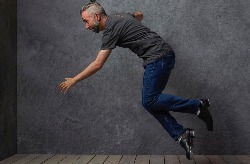 Andrew Nemr has a one-man show that is different from the usual single-performer gig. Yes, he tells the story of his life, and no, he isn’t really an actor. But you don’t have to be an actor to tell your own story. And if you self-identify as a tap dancing, only child, Phoenician-Canadian-American whose parents escaped the Lebanese Civil War on the last bus out of Beirut, well, you have quite a story.
Nemr takes us through his life as a loner, bullied in school for being different, who discovers tap dancing at Mr. Chris’s dance studio in suburban Virginia. The great moment in his life was when he saw the film “Tap” starring Gregory Hines and Savion Glover, fell in love with the form, and promised himself he would meet the two of them after a 30 year career as a tap dancer. Instead, it took him a year, and he met them both the same day. He tells us of his five years of dancing with Glover, of finally being “in,” of belonging.
He details the disappointment of not being part of Glover’s Broadway show “Bring Da Noise, Bring Da Funk,” largely because he was white. And did that make him the token white kid in the crew? The grand old man of tap Dr. Jimmy Slide helped him address, but not really resolve, the question of black dance and its place in the entertainment world. And I happen to love his father’s statement, as a Lebanese refugee, “division leads to death,” a plea for unity that is sorely needed in 2017.
What makes this show so powerful is that Nemr doesn’t just tell us his story. He dances it with liquid grace and laser-precise rhythm. It is clear that from Mr. Chris’s studio to his days with Savion and Greg (yes, he knew Hines as Greg) and beyond that he worked on his art because he can do nothing else. In an intimate setting like Theatre 2 of the Tribeca Performing Arts Center, it’s almost overwhelming – almost.
Contrary to what some have said for decades, tap dance is not a dying art. Nemr is a powerful evangelist for the form, and his teaching and speaking about it make him one of the successors to the tap royalty he idolizes. His own company, Cats Paying Dues, is alive and thriving. And his show, Rising to the Tap, is plain riveting.
Rising to the Tap played at the Tribeca Performing Arts Center, 199 Chambers Street, New York, December 15-16, 2017.
For more information on Nemr, visit his site