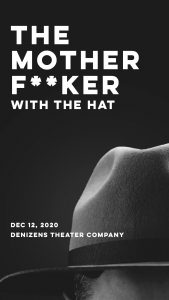 The premise of the play is simple enough. Jackie (David Feliz) is a former drug dealer freshly out of prison and determined to go straight. His girlfriend Veronica (Jillian K. Waters) is thrilled about this, but she is still using. Just before they get into bed to celebrate his successful job search, he sees a hat that doesn’t belong to him. He suspects her of cheating; he goes off to meet his parole officer and AA sponsor Ralph D (Gregory Marlow), who is having trouble with his own wife Victoria (Lara Ruth Smith). Jackie gets a gun, is convinced to leave it with his cousin Julio (Romeo Sanchez), and then, things get messy. We learn that Ralph has slept with Veronica, that he has cheated before with someone else, and then, Victoria tries to avenge herself by getting Jackie to sleep with her (he declines). Before it is all over, Jackie and Ralph (who turns out to be the MoFo with the Hat) have fought, and Jackie is on his way back to prison.

When this show ran at the Schoenfeld Theater on Broadway back in 2011, the big news was Chris Rock playing the role of Ralph D and Bobby Cannavale as Jackie. I was lucky enough to see it, and it measured up to the hype. The script (by Stephen Adly Guirgis) is solid, and it rings New York True, while the execution was first-rate.

The Denizens Theater Company still had the script, but a global pandemic creates difficulties that Messrs. Rock and Cannavale did not face on the execution front. Producer Lara Ruth Smith, Director John Fico and Assistant Director Megan Roads along with the cast and crew overcame all of that.

As the Company said before the show began, “This performance is a hybrid of two mediums; pre-recorded and shot like a film, but the rehearsal process and the character work still very much honors the world of a stage play. Because of the pandemic it should be noted that everything was filmed as socially distant as possible. Rehearsals took place on Zoom, scenes were filmed in front of a green screen, and no actors were on the set together – some of the actors have never even met in person.”

So, it has some of the features of an independent film, but the work done before filming was ensured that there was an added theatre dimension to it. What impressed me was the ensemble feel that came across the internet. There are live performances that don’t achieve that, and films may have it but it has a different tone.

I found the interaction between Jackie and Veronica to be realistic and their mutual agony heartfelt. Ralph and Victoria’s ups and downs are not quite a extreme but Marlow and Smith delivered subtlety that made it work. Finally, the tension between Jackie and Julio throughout spoke of a family relationship that had a lot of baggage, only some of which was resolved at all. Verisimilitude did not suffer from the artificial nature of streaming video.

This hybrid form is just one of the new ways that theatre, film and acting are merging and adapting to the medical realities we all face. When everyone has had their shots, and when normal starts to make a comeback, I have no doubt that live theatre will be as strong as before. Yet, I can’t help but feel there is some kind of a future for this as well. Streaming can provide revenues that live theatre has left on the table up till now. Finding legal and commercial structures that make that easier is needed. For that reason, a re-broadcast of this production is not possible just now.

That is a pity because I had a great Saturday night at the theatre on my phone.

“The Motherf**ker with the Hat” was presented by the Denizens Theater Company on February 20, 2021, and that was a repeat of a performance from December 12, 2020. For information about possible future showings, please visit the Company’s website.