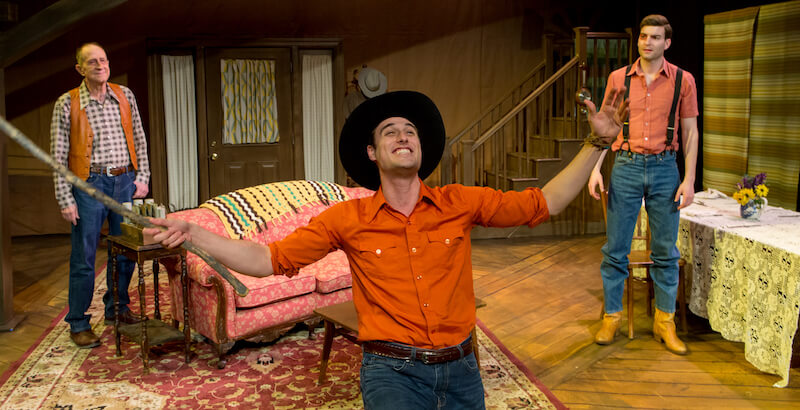 I didn’t realize how thirsty I was for a well made play, performed by a stellar cast, until I soaked in the charms of the “The Rainmaker” by N. Richard Nash. It’s a classic play from the “golden age” of American theater that transported me to the halcyon days of 1920’s farm life in the American West. Time slows down here on the Curry farm as you get drawn into their close-knit, yet fraying family quilt. It’s like paging through an old album, with sepia photographs, that slams you with intense nostalgia and a longing for people you have never met. It’s icy lemon sorbet on a humid day, simply delicious!

We escaped the boiling hot New York spring afternoon only to arrive in drought stricken Kansas, where the “heat” was wafting off the stage in every gesture, lighting cue and character’s “sweating” brow. In the Curry family living room, we meet the earnest clan. H.C., the father, Noah the eldest son and farm manager, Jimmy the youngest son and Lizzie the only daughter. The latter having returned from a failed attempt by the Curry men at finding her a husband in another town. Spinsterhood stares her in the face as she nurtures a secret love for File, the Deputy Sheriff, who does not appear to be interested in her as a potential wife. Into this hotbed of heat and disappointment arrives Bill Starbuck, an oasis of intoxicating mirages who whips up the air with his lust for life. His presence brings unspoken “truths” into the open that gather thunderous momentum to shift everyone’s life course.

“The Rainmaker” is an enduring classic because the characters are exquisitely drawn, with a plot that is fertile with optimism and the tragedy of our human shortcomings. It’s at times heartbreaking and in other moments completely hilarious. Director Peter Dobbins has ensured the perfect pace and never “gilds the lily” with too much sentimentality. He keeps the characters real and grounded as they struggle with their life challenges and step into quicksand of their own making. He is a master of crafting believable moments and a rich emotional landscape that keeps us rooting for all of the Curry clan and cohorts throughout. His expert hand was evident in every cadence and confrontation.

The cast are a formidable team. Ken Trammell as H.C. Curry is entirely lovable as the wise father able to discern the truth lurking behind the false words spoken around him. Trammell puts us all at ease with his mischievousness and gentle demeanor – we completely trust him to solve any problem that arises. He is the glorious quiet anchor of the piece and you want to adopt him as your own dad. Benjamin Jones, as Noah Curry, is riveting as the alpha male marking his territory as he attempts to control every aspect of his environment. He exuded a palpable strength as the “control freak” hell bent on getting his way. Jones is a magnetic actor that commands the stage with his detailed character choices.

Some of the comic relief comes in the feisty package of Sean Cleary as Jimmy Curry. He plays the “fool” with infectious enthusiasm that has you rooting for him in all of his misadventures. Cleary has fantastic comic timing and was a total joy to watch. The “heart” of the story is worn on the sleeve of Fleur Alys Dobbins as Lizzy Curry. She plays both the strong, intelligent, self assured woman (in the company of her family) and the tongue-tied, love sick, insecure amore, brilliantly. Dobbins is a powerful actress that carries the complex emotional arc of her character with great skill and sensitivity.

The family unit is thrown upside down by the massive energy of Mathew Provenza as the conman/change agent, Bill Starbuck. He is an electric performer filling every corner of the theater with his exuberance. Provenza has created a character that is immediately like-able and who makes you sit up in your seat ready to go on any adventure with him. His Starbuck is bursting at the seams with dreams and high voltage carpe diem. He is entirely believable as someone who could bring the rain, the flood, the seismic shifts. It is as if he is the personification of the elixir of youth.

Our almost unwilling romantic lead is the character of File, beautifully played by Jim E. Chandler. He inhabits the bashful, hurt in love, Deputy Sheriff with a delicious tenderness. Chandler gives us a well observed cowboy who wrangles with his emotions and comes off second. We see the reserved exterior and the deep pools of emotional complexity undulating beneath the surface. It’s a superb performance.

In the smaller support role of Sheriff Thomas, Jim Haines gives us a jovial, nurturing man trying desperately to break through the hard exoskeleton of his deputy. Sheryl Liu’s scenic design was hearty and made you feel really “at home” in the space. The heat and family fireworks were perfectly supported by Michael Abrams nuanced lighting design. The era was accuratley captured by Danica Martino costume design with Caroline Eng provided us with an epic, emotion stirring sound design.

Spoiler alert: we get a “happily ever after” ending, not a Sam Shepard’esque nuclear family explosion. The Blackfriars Repertory Theatre and The Storm Theatre Company have given us a much needed antidote to the fast-paced, high stress hamster wheel we can find ourselves on mid-week in NYC. Needless to say, when we left the theater, it had recently rained. #justsaying #rainmaker #miraclesareeverywhere.

“The Rainmaker” runs April 27 – May 20, at The Sheen Center for Thought and Culture (Black Box) 18 Bleecker Street. For more information and tickets visit https://sheencenter.org/shows/rainmaker/