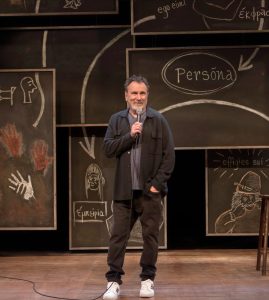 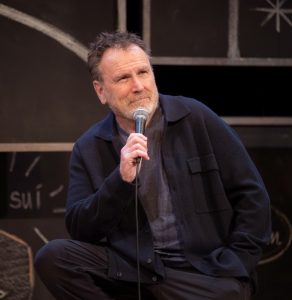 Colin Quinn has been a New York City mainstay for over 35 years. He’s remembered as far back as the mid-nineties when he was the co-host and announcer for MTV’s trivia show, “Remote Control”. I can still hear Colin’s voice in my head right now introducing the show’s host, the late Ken Ober, “The Quiz Master of ’72 Whooping Cough Lane”. Many will also remember his iconic “I’m Going Back To Brooklyn” parody. There is also, of course, his very memorable stint as SNL’s News Correspondent in the early 2000s. He’s been at the forefront of comedy my entire life. I even had the opportunity to deliver scripts to his NYC apartment while an intern at NBC in 1999.
We had some small talk– a lifetime ago in a different world– a world before smartphones. A world that Colin touches on clearly and concisely with a frenetic energy very few can harness and whip out on a sold-out crowd.

One of the great aspects of Colin Quinn’s personality is his everymanedness. Yes, I made that word up, and autocorrect won’t let me forget. Quinn is the guy you can talk to about anything, anywhere, and anytime. That is why ”Small Talk” is a perfect title and theme for this latest production. With a veteran stand-up comedian, everything is small talk. Directed by James Fauvell, this solo one-act has laughs from beginning to end. Colin’s ability to get an audience on
his side and keep them knows no compare. There may have been one moment Quinn lost the audience for 15 seconds as per a negative view of liberals, in an audience of I’d assume, mostly liberals, though he got us back as fast as he lost us.

I caught “Small Talk” On January 19th, 2023, at the Lucille Lortel Theater on Christopher Street, exactly four years to the day after I saw his “Red, White and Blue” special at Minetta Tavern on MacDougal Street in Greenwich Village NYC. That piece was much more political than this current performance. The 80-minute set reflects on a lifetime of “Small Talk,” exploring how the art of small talk has become obsolete with generational changes and how humans are losing the ability to connect. Despite that, the audience immediately connected as it’s something everyone lives with, and laughing at our foibles along with others is the ultimate human connector.

“People now make fun of small talk. They say small talk is irrelevant. Throughout
history, the weather was the only important subject. Everything else was small talk. Throughout history if someone asked you, “Hey, how you doing?” and you answered, “I’m unfulfilled at work. I’m having an existential crisis,” they’d be like, “Cut the shit, what’s the weather going to be like?”.

The entire production is based on this quote above. When farmers talked to each other back in the day before celebrities existed, the most important thing was knowing the coming weather. Nothing else mattered. Now we talk less and nothing matters (if it isn’t our stuff). We don’t even have that many farmers in the United States anymore as we quickly changed into an information society. As we become more connected online, we only became less connected in
person. I think I say good morning and good night less than I used to. Pleasantries just don’t exist anymore. Maybe there is just less to be pleased about.

I think Colin would agree, as he added,

“You carry two billion people’s personalities with you at all times. If you post more than 5 times a day you should be on a 72-hour psychiatric hold. We don’t understand nonverbal cues anymore, no facial recognition and no sarcasm.”

I’m someone who falls into the category of posting too much. The above quote sums up how we interact. Covid has also helped with thwarting connections. It’s probably made people more comfortable with not connecting. Less small talk equals less connectivity. If you want to laugh about how awful and screwed-up society has become, this is the show to check out. Get your tickets today for this short engagement at the Lucille Lortel ending February 5th.

For Tickets Contact The Lucille Lortel theater at 212-352-3101 or www.lortel.org

Colin Quinn’s presence on the New York scene started over thirty years ago. I was first introduced