Anyone who has tended a garden (even on a rooftop or fire escape) or owned a houseplant knows that a living thing needs proper care, time, nourishment, and nurturing to grow, flourish and reach its potential. The same is true of a new work of theatre. It does not sprout from the playwright’s head or the director’s vision fully actualized but requires an investment to cultivate the seed and make it bloom. I have seen no finer example of this in the past two years than the journey of the interactive play celebrating modern Mexican American culture playing (on extension) at

For a play premiering on Memorial Day weekend, what could feel more festive than a family gathering at a backyard barbecue served with a side of Shakespeare, a heaping portion of pop culture references, simmered in family drama, seasoned with violence and a dash of glitter to taste? Ay, there's the spice rub! Shakespeare's plays have had many adaptations and updated versions that take creative licenses with the Bard's works and themes. A favorite choice is the tale of the brooding, tragic prince with intense and questionable family dynamics. The Guardian recently published a piece examining the obsession that dramatists of stage and

The Prom, now playing at the Longacre Theatre, might just be the show that single-handedly puts the Broadway back into Broadway musicals. With rare yet notable exceptions, most of them Tony winners -- Fun Home, Hamilton, Come From Away, The Band’s Visit and Dear Evan Hansen (the latter of which The Prom is a close cousin of but the cheerier, more bubbly sort) -- most musicals being produced today are based on branded properties: film or book adaptations, jukebox creations where the songs are guaranteed to be memorable hits (they already are) or pop culture icons (Spiderman: Turn Off The 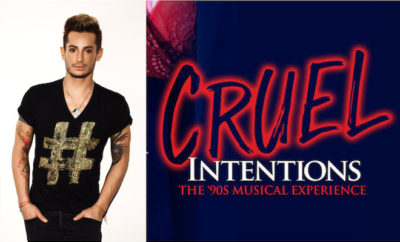 Sit back, grab a drink and strap yourself in for a ride on this sonically brilliant, delightfully cheeky romp through '90s nostalgia that's easily the most fun you'll have on or Off Broadway all year! With the current conditions of the world, it's no surprise and perhaps even the responsibility of the arts to portray and reflect upon where we are and how we got here. The result is (or can be) impactful and deep yet often heavy work laden with meaning and statements on our state of affairs. Even in comedic or satirical efforts such as Mankind or Jerry Springer