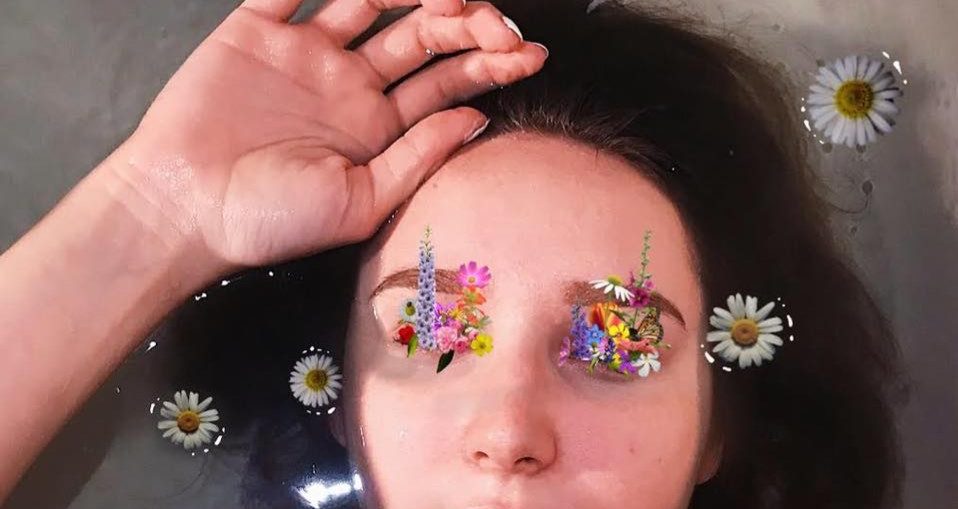 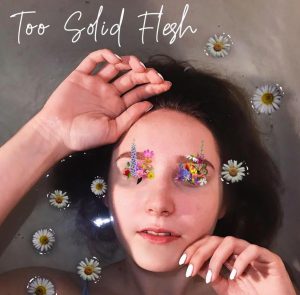 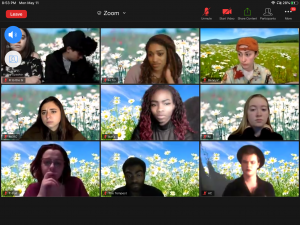 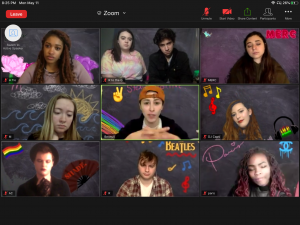 “If you seek escape, entertainment, raw reality and the wit of Shakespeare himself, this is the moment for you. We invite you on the journey that is Too Solid Flesh.”

The above statement is how Too Solid Flesh a new Zoom play and ensemble piece written by Megan Lohne and Directed by Shoshanah Tarkow pulls in their audience. Yeah, I said it, “Zoom Play”, which I believe will soon become as ubiquitous as the word “podcast”. I want to say this is theater of the future, but it is theater of the now. As the pandemic took hold worlds were changed and entire countries have been brought to their knees. One of those worlds hit most pappably was just about every avenue of entertainment. Movies and television shows have ceased production, shows arent touring and Broadway stopped their shows and won’t be back until at least September. I was there that windy night in March when all of Broadway bowed and theaters across the nation closed. Some beleive it may be gone forever. Like any true trubadour of theatre would do, Megan Lohne decided that theater was not going to be taken away from her. This past Sunday afternoon May 17th Too Solid Flesh pulled in an audience of over 50 who watched from their homes as the story took hold. Know this, there really isn’t a training ground for on line theatrical productions of this nature. Everyone is learning as they go along. Megan had to delve into what she has learned about writing for the stage and adapt it for a feature length on line drama. I recently asked Megan how she went about her rehearsal process during this very new theatrical experience.

“Shoshanah and I worked on the production for roughly a month.  We started rehearsing the first act while I was still writing the second one.  Even today, we’re still workshopping/cutting/incorporating technical elements.  We talked about our process with DC Theatre Scene so this link below may give a good picture of our process as well:”

I’ve had the opportunity to take a look at many different types of theater over the years. I’ve reviewed dance, which I know little about, I discussed musical theater with major Broadway stars, I’ve even stage managed equity productions but this is my first Zoom play and it was honor to get the opportunity to reflect on theater and how it’s ever changing and growing. Id like to add despite watching this production from my Chromebook I actually showered and dressed up for this like I was going out to the theater. This also marks the first time I got to do fold my laundry and make coffee while watching a theatrical event. That I can definitely get used to.

My favorite quote from this piece wrought with faves were “A world without ice cream?” (which may have worried me most through this tumultuous play) and “You ever feel like you’ve lived a thousand years and were only 20?”. A perfect sentiment for a world that feels frozen in time and reflects what many people feel as they continue lockdowns. This drama truly touches on the awkwardness of the now and what one on one human interaction is like without any actual physical human interaction. Though much of the piece is gripping and despondent in the same way great Miller plays like “Death of a Salesman” and “View From a bridge” are, there are still many laughs and great relationships made. All our theatrical archetypes were represented. AC who is the first we meet and somewhat of a narrator was very reminiscent of Boy George from 80’s band Culture Club. His wit and repartee with the actors showed. The production in part takes place in virtual journals of several students at a social distancing school. One woman is particularly upset about some rejection she feels is being put on her. Eventually everyone is an emotional wreck and is a statement on miscommunication and touches on how easily we can hurt people and be unaware and the overwhelming loneliness that ensues. We even have an online spirit presence in a ghost that haunts a character much like Hamlet. This play was almost that of a new world “Lord Of The Flies”. In that we see a bunch of students relationships falling apart and we see how cruel humans can often be when stuck in a circumstance. The entire emsemble cast pulled off an amzing feat, especially with how difficult scene changes can be and cues as glitches happen. Megan is able through her words, touch on the need humans have to reach out to other humans at their weakest and most vulnerable. A consumate entreprenuer Megan is already looking towards using this concept for schools and stated,

“We’re open to chatting with other universities on how they can create content like this moving forward if certain schools are forced to go online in the fall.”

The imperfections of Zoom work well with the concept. As we know any online communication can be glitchy, that glitchyness was used well. I also imagine as a performer myself over the years acting to my own face on Zoom could be distracting, not like in a narcissistic way, but I want to use the other actors reactions to get to my next reaction as I turn out dialogue. Too Solid Flesh, touches on self worth, instinct and the desperate nature of humans. This could become a cult favorite in the same way the long running show “Line” has become. If you’re interested in seeing how theatre grows, check out this production.

In an unconventional distance learning institution, where the students who hide behind screen names more often than not become the teacher, an anxiety ridden pupil, O, tries to find a connection to save her from her thoughts and herself. A cross pollination of Shakespeare’s Romeo & Juliet, Hamlet, & The Tempest, Too Solid Flesh written by Megan Lohne and directed by Shoshanah Tarkow explores youth in the midst of pandemic, connection across screens and the dangerous undiscovered country of mental health in a world where it is lethal to touch.

Born from a question and answer session with students from Adelphi University who have recently been displaced from their classrooms to their homes, Too Solid Flesh utilizes live performance, pre-recorded segments, app integration, audience participation and more to create a truly unique online experience which is both interactive and immersive.

RSVP to LikeFreshSkinrsvp@gmail.com – An e-mail will be sent to you the day before the performance with instructions.

Thursday, May 21 at 6:30 pm – Talk Back to follow moderated by Margaret Lally, Associate Dean of Arts & Sciences at Adelphi.